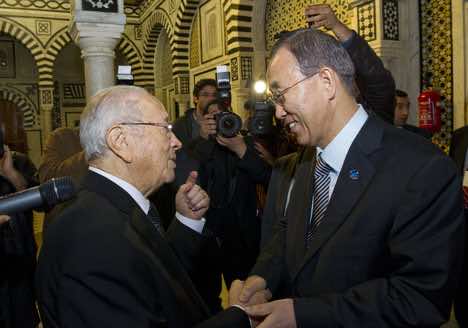 Tunisia expressed, on Monday in New York, hope that a lasting solution will reached for the Sahara issue which “has always been an obstacle to the Maghreb integration”.

“Hoping that a lasting solution will be achieved for the problem” of the Sahara, which has “always been an obstacle to the Maghreb integration,” Tunisia “relies on international efforts and those of the parties to the conflict in order to resume negotiations towards a lasting political solution, in accordance with international legality,” Tunisian Foreign Minister Mohamed El Kefi Mouldi told the UN General Assembly.

The minister, who was speaking during the general debate of the 66th session of the General Assembly, also stressed that Tunisia’s regional integration in its regional environment figures high on its foreign policy’s list of priorities, adding that his country gives special attention to its relations with its immediate neighbours, namely the countries of the Arab Maghreb.