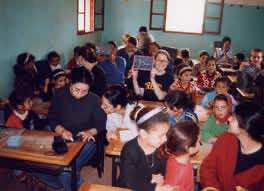 Over six million Moroccan children set off to schools a few days ago. This year, the beginning of the school term was accompanied with lively debates over the future of the kingdom’s state education system.

Moroccans have voiced little confidence in state education and are critical of both teachers and the government’s strategy in this sector.

The Ministry of Education, however, insisted that much progress had been made, despite the persistence of certain difficulties. The Secretary of State for School Education, Latifa El Abida, acknowledged that there are several obstacles standing in the way of her department’s strategy.

At a press briefing held on September 13th, she stressed the importance of motivating teachers, some of whom have lost faith. The official believed that improvements in other areas of the education system could restore confidence to those who work in the sector.

As for teaching methods, which have been slammed by parents and experts alike, El Abida said that the government intended to release updated versions of primary-school textbooks after this year. It also plans to develop a curriculum for children with special needs and to assess the syllabi taught at lower and higher secondary level. The aim is to teach more science and technology, encouraging more pupils to take up these subjects.

In Morocco’s big cities, many parents elect to send their children to private institutions for schooling despite the overwhelming burden it poses to such families.

“It’s difficult to have faith in state schools, where the teachers aren’t monitored closely enough and the curricula are out of date”, said Laila Zerhouni, a mother of two children who attend a private school at a cost of 2,400 dirhams a month. She and her husband have a combined income of 6,000 dirhams.

According to Social Development Minister Nouzha Skelli, the government is making significant efforts to improve schools and that more than 23% of the state budget is spent on education.

“More than 4 million pupils have received school bags and several thousand other young people have been admitted to Dar Talib, Dar Taliba and other boarding schools”, Skelli stated at a Casablanca meeting on September 14th.

Another problem is the dropout rate. Some 400,000 pupils drop out of school every year. To address this problem, a scheme called Tayssir has been launched. The programme provides direct financial aid to disadvantaged families. The plan is currently benefiting 609,000 pupils and 88,000 families, as compared with 47,000 families and 363,000 pupils in 2008-2009, but is still not nation-wide.

The Secretary of State admitted that truancy, especially by girls in lower secondary schools in rural areas, is a continuing problem. Families in the countryside still prefer to keep their daughters at home for cultural reasons. The shortage of education facilities in certain areas also contributes to the problem.

“I had ambitions which were quickly wiped out. Now, all I can do is wait for a husband to appear on the horizon,” 15-year-old Hafida, who lives in a douar in Taza, told Magharebia. She had to leave school during her sixth year in primary education because the school was too far away from her home.