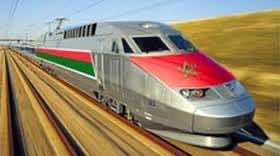 French President Nicolas Sarkozy will be in Morocco Thursday to mark the start of work on Africa’s first high-speed rail line, in a bid to highlight France’s role in delivering the project.

An agreement on the construction and operation of a 350-kilometer (219-mile) high-speed rail line linking Tangiers and Casablanca via the capital Rabat was signed during Sarkozy’s 2007 visit to Morocco.

Rabat says it expects the first leg of the rail-line to cost three billion euros ($4.1 billion), for which France has extended a 920 million euro loan.

The Tangiers-Casablanca line, scheduled to enter service in 2015, will eventually be extended to Marrakesh and Agadir, Moroccan officials have said.

The balance of the rail project is being funded largely by Arab states, including Saudi Arabia, the United Arab Emirates and Kuwait.

In December, the French group Alstom inked a 400 million euro deal to provide Morocco with 14 high speed trains, a contract seen as a boost for the company after it was snubbed by Eurostar, which had elected to buy trains from Germany’s Siemens.

As young demonstrators held rallies across the country to demand political reform earlier this year, the king proposed a series of measures to curb some of his executive powers.

In a July referendum, 98 percent of voters backed the king’s proposals, although some activists have said the measures do not go far enough.