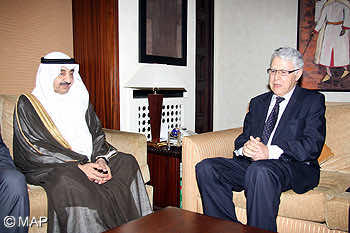 The head of government Abbas El Fassi and Kuwaiti National Assembly Speaker Jassem Al-Kharafi expressed, at a meeting on Wednesday in Rabat, their determination to promote bilateral cooperation in different fields.

The meeting was an opportunity for the two parties to commend the brotherly links between HM King Mohammed VI and HH Sheikh Sabah Al-Ahmad Al-Jaber Al Sabah, as well as the long-standing relations between the two countries.

Both officials also praised the political and economic cooperation, as well as the convergence of views on numerous Arab and international issues.

Abbas El Fassi lauded the high level of cooperation between Morocco and Kuwait, notably in field of economy, agriculture, tourism, housing and investment.

For his part, Jassem Al-Kharafi reaffirmed Kuwait’s firm support for the Morocco’s territorial integrity, highlighting the willingness of his country to promote cooperation with Morocco, notably between the legislative institutions of the two countries.