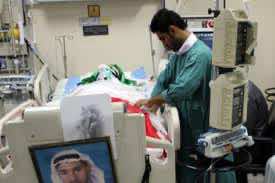 Thirteen doctors and nurses who treated anti-government protesters given 15-year jail terms for crimes against state.

Thirteen doctors and nurses who treated anti-government protesters during demonstrations in Bahrain earlier this year have been jailed for 15 years for crimes against the state.

Seven other medical professionals were given sentences of between five and 10 years by a special tribunal that was set up during the emergency rule that followed the demonstrations.

The doctors’ trial has been closely watched and criticised by rights groups for Bahrain’s use of the security court, which has military prosecutors and both civilian and military judges, in prosecuting civilians.

Most of the medics worked at the Salmaniya Medical Centre in Manama, which was stormed by security forces after they drove protesters on March 16 out of the nearby Pearl Square – the focal point of Bahrain’s protest movement.

They were also accused of “inciting hatred to the regime and insulting it, instigating hatred against another sect and obstructing the implementation of law, destroying public property and taking part in gatherings aimed at jeopardising the general security and committing crimes,” BNA said.

“All these acts were done with a terrorist aim.”

Speaking to Al Jazeera, Sheikh Mubarak bin Abdulaziz al Khalifa, a top member of Bahrain’s information affairs authority, said that the medics were not “practicing their profession in the manner that all doctors and nurses should have been abiding to”.

But the doctors have repeatedly denied the charges, which they say were created by the authorities to punish medical staff for treating people who took part in anti-government protests.

“There was no sense of rebellion,” Robert Fisk, senior Middle East correspondent for The Independent, who was in Bahrain during the March unrest, told Al Jazeera.

“It was a professional sense of, ‘how do we treat so many people who have been shot and wounded in a short period of time?'”

The daughter of one of the charged medics told Al Jazeera that none of the doctors or nurses attended Thursday’s hearing.

“These cruel sentences present a serious breach of law and is considered to be an attack on the medical profession,” she said in a statement.

“We urge all international medical organizations, societies, bodies to take an action, issue a statement or do anything to condemn the recent sentences of Bahraini medical professionals.”

Matar Matar, a former opposition MP in Bahrain, told Al Jazeera condemned the sentences, saying they signal that the goverment is ignoring a major “political problem” and “that a big portion of Bahrainis are insisting to have political reforms”.

“Day after day, if we are late to solve and fix our problems, they’ll become more complicated,” he said.

“They [officials] should face the problem and start real political reform.”

In the same court, but a separate case, one protester was sentenced to death and another to life imprisonment on Thursday for killing a police officer during the protests.

Thursday’s sentences came a day after the tribunal upheld sentences for 21 activists convicted for their roles in the protests, including eight prominent political figures who were given life terms on charges of trying to overthrow the kingdom’s Sunni rulers.