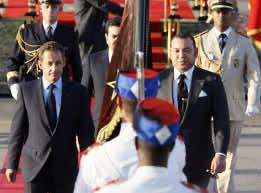 French President Nicolas Sarkozy arrived Thursday to kick off work on Africa’s fastest rail line, in a bid to highlight France’s role in the project.

He was met at Tangiers airport by King Mohammed VI ahead of the joint launch of the 350-kilometer (219-mile) project linking the northern port city with Casablanca to the south via the capital Rabat.

Sarkozy, who was accompanied by a clutch of ministers and other officials, was to have talks with the king later in the day on political subjects against the backdrop of major change brought about by the ‘Arab Spring’ uprisings.

The Moroccan king has introduced a measure of political reform and a French presidential official said “the changes in Morocco are no less important than those seen in other countries.

The two leaders will also discuss the issue of terrorism, French officials said, referring to an April attack in Marrakesh — a future stop on the rail line — which killed 17 people, including eight French tourists.

The Tangiers-Casablanca railway, scheduled to enter service in 2015 and cut the journey time from nearly six hours to just over two hours, will eventually be extended to Marrakesh and Agadir, Moroccan officials have said.

Rabat says it expects the first leg of the line to cost three billion euros ($4.1 billion), for which France has extended a 920-million-euro loan.

The balance is being funded largely by Arab states, including Saudi Arabia, the United Arab Emirates and Kuwait.

In December, the French group Alstom inked a 400-million-euro deal to provide Morocco with 14 high speed trains, a contract seen as a boost for the company after it was snubbed by Eurostar, which had elected to buy trains from Germany’s Siemens.

Africa boasts one other high-speed link — South Africa’s $3.8-billion Gautrain which has run at speeds of 160 kilometres (100 miles) an hour between Johannesburg and the capital Pretoria since early August.