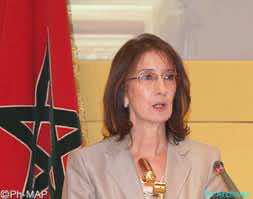 Morocco’s Mining, Energy, Water and Environment Minister Amina Benkhadra, called on Thursday in Marrakech for reinforcing the Euro-Mediterranean partnership in the field of energy.

In an address read on her behalf at the opening of the 10th France-Maghreb Convention, Benkhadra said that this annual entrepreneurship promoting event is an occasion to ponder on the means to reinforce the Euro-Mediterranean partnership in the field of energy, notably renewable energies.

In light of the global developments relating to energy, Benkhadra stressed the need for promoting renewable energies, saying that this goal requires further cooperation between the North and the South.

Developing renewable energies is at the heart of a national strategy aiming to better integrate Morocco in the global economy, she underscored, adding that Morocco is playing a pioneer role in the field of energy cooperation in the region.

In this respect, she said the Advanced Status- granted to Morocco by the EU- will help the Kingdom integrate the regional market of green electricity.

The annual France-Maghreb Convention brings together 200 economic operators, officials and CEO’s from the Maghreb and France