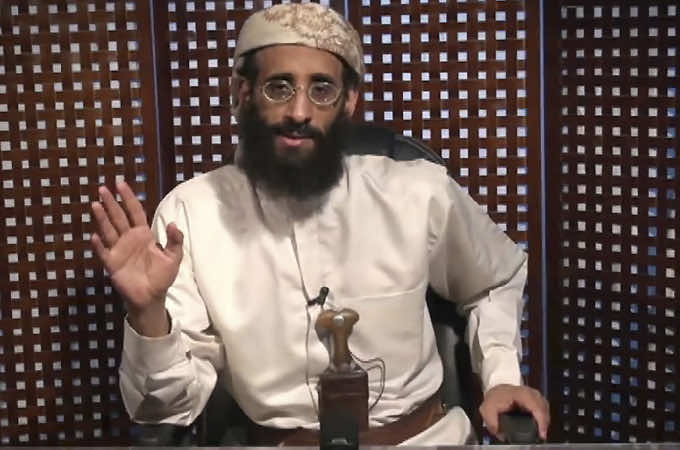 Yemen’s defence ministry has reported that Anwar al-Awlaki, a well-known and controversial imam with ties to al-Qaeda, was killed along with four others.

A government statement released to the media on Friday said the dual US-Yemeni citizen was hunted down by Yemeni forces, but did not elaborate on the circumstances of his death. Awlaki was wanted by both the US and Yemen.

“The terrorist Anwar al-Awlaki has been killed along with some of his companions,” said the statement sent by text message to journalists.

Tribal sources told the AFP news agency that Awlaki was killed early on Friday in an air strike that hit two vehicles travelling through an al-Qaeda stronghold in central Yemen.

Government officials say he was targeted 8km from the town of Khashef in the province of al-Jawf, just 140km from Sanaa.

The airplane that carried out the strike was likely to be American, according to tribal sources, who added that US aircraft had been patrolling the skies over Marib for the past several days.

Tribal sources also said Awlaki had relocated from the Shabwa region around three weeks ago.

A US drone aircraft targeted but missed Alwaki in May, and the Yemeni defence ministry had previously announced Awlaki’s death late last year.

On December 24, the Yemeni government said he had been killed in an air strike only to admit later that he was still alive.

“He has been a target of US drones at least three times,” Hakim al-Masmari, editor-in-chief of the Yemeni Post, told Al Jazeera.

“The Yemeni government will face a lot of criticism, especially in the south, for allowing US drones to attack Yemeni civilians. But it will not be a blow to Al-Qaeda in the Arabian Peninsula from any perspective. We don’t feel they will suffer, because [Awlaki] did not have any real role in [AQAP].”

‘Not just a cleric’

“Mr Awlaki is a problem,” John Brennan, US President Barack Obama’s counter-terrorism adviser, said in January 2010. “He’s clearly a part of Al-Qaeda in [the] Arabian Peninsula. He’s not just a cleric.”

Brennan directly accused Awlaki of having links with Major Nidal Hasan, who is suspected of shooting dead 13 people at Fort Hood military base in Texas in November 2009, and who is set to face trial in a military court on March 5, 2012.

The Pakistani-American who pleaded guilty to the May 2010 Times Square failed car bombing attempt told interrogators he was “inspired” by Awlaki after making contact over the internet.

Awlaki may also have had contact with Nigerian student Umar Farouk Abdulmutallab, accused of trying to blow up a Detroit-bound Christmas Day plane in 2009, Brennan said.

Obama has accused AQAP of arming and training Abdulmutallab and said the group was also responsible for the October 2010 parcel bomb plot that originated in Yemen.

Two parcels addressed to Jewish institutions in Chicago – containing the explosive PETN hidden in ink toner cartridges – were found to have been freighted from Sanaa on commercial airlines.

In July 2010, Washington placed Awlaki on its list of terrorism supporters, freezing his financial assets and banning any transactions with him.

In a video posted on websites last May by AQAP, Awlaki urged Muslims serving in the US army to follow Hasan’s example, and also defended Abdulmutallab.

“[The White House] says he was acting against the US, trying to harm the US … So the [extrajudicial decision] was an extra-ordinary stance about protecting US citizens and property.”

Viewed as a spiritual mentor, Awlaki is neither a senior Islamic cleric nor the leader of AQAP, which is headed by Nasser al-Wuhayshi.

Eloquent in English and Arabic, Awlaki encouraged attacks on the US and was seen as a leader who could draw in more al-Qaeda recruits from Western countries.

Awlaki, the US-born 40-year-old father of five, went a step further in a November internet posting, and called for the murder of any US citizen.

“Do not consult anyone in killing Americans,” he said, the US monitoring group SITE Intelligence reported. “Killing the devil does not need any fatwa.”

“It’s either us, or you,” Awlaki said, addressing Americans in the video.

Al Jazeera’s Hashem Ahelbarra said that Awlaki was instrumental in the growth of “the most aggressive al-Qaeda offshoot outside of Afghanistan and Pakistan”.

Our correspondent also said Awlaki was able to evade US efforts to target him due to strong support and protection from his tribe.

Awlaki, wanted dead or alive by the US, was sentenced in absentia in January 2011, to 10 years in jail in connection with the killing of a French engineer.

The court in Sanaa, the Yemeni capital, had accused al-Awlaki – believed to have been hiding in southern Yemen at the time – of motivating the crime.

Awlaki was arrested in Yemen in 2006 for his role in kidnapping the son of a rich Yemeni family and demanding ransom money “to finance al-Qaeda”, Yemeni security sources said.

Two years later he was set free on condition that he report to police daily, but he fled to the Shabwa region.

“But there’s no doubt that [Awlaki’s death] is going to have a serious impact on AQAP,” Ibrahim Sharqiyeh of the Brookings Doha Center told Al Jazeera.

“This is going to strengthen [Yemeni president Ali Abdullah] Saleh’s position,” he said. “Now he is able to suggest that he is the right [leader] for the country.”