The events in the city of Dakhla began Sunday, September 25 by clashes between residents of two neighborhoods in the city, 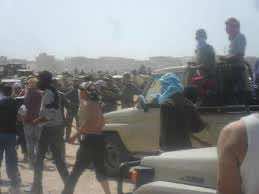 New York – After a football match between the local teams Mouloudia Dakhla and Chabab of Mohammedia, a meeting which ended in victory for the visitors, three goals to nil.

This score sparked the ire of local fans, a group of young people living in the neighborhood “Oum Tounsi” who violently attacked a young man from the “Al Wakala” neighborhood.

As reported by main news outlets, ex-convicts who were at the scene of the incidents took the opportunity to attack passerbys with sticks and knives. The situation escalated, which required the intervention of the police, who were targeted by stone throwing.

Pushed back into their neighborhoods to keep them away from the other belligerent party, neighborhood youth from the “Oum Tounsi” neighborhood tried to block road access leading to the neighborhood, known for being a stronghold of smugglers that regularly attack forces in order to protect their criminal activities.

Violent clashes broke out again Monday September 26 at 1:30 a.m. causing several injuries and the sacking of dozens of vehicles, homes and public buildings.

Following these incidents, the prosecutor’s office ordered an investigation to identify those involved in these acts and bring them to justice, according to a statement from the province of Oued-Eddahab-Lagouira.

These events have resulted in the death of eight people, including two elements of the Moroccan Armed Forces (FAR), 58 injured and the arrest of nine troublemakers.

It should be noted that four of the deceased were hit intentionally by all-terrain vehicles driven by activists speeding and targeting pedestrians in an apparent attempt to raise tension in the city, demonstrating a willingness to subversion.

Some of these vehicles were abandoned on the outskirts of Dakhla, which shows that foreigners in the city took advantage of events to carry out activities of subversion.

To find a way out of this situation, a delegation from the Interior Ministry led by Taib Cherkaoui has made the trip to Dakhla, where she was able to meet different locals, who were pleased that the security forces intervened to restore order.

Polisario attempts to capitalize on the Dakhla events

Leaving no stone unturned, the Polisario Front and its foreign backers have been quick to jump on these events in order to capitalize on them. This case has once again unveiled a deliberate intent to harm Morocco’s reputation through the excessive amplification of these events, which has more to do more with hooliganism than with politics. The looting that follows football games are commonplace all over the world.

Yet as the Polisario is on the lookout for any minimal incident to regain its dwindling legitimacy both inside the Tindouf camps and abroad, the clashes that occurred last weekend  have been portrayed by the Polisario as pitting different components of the city of Dakhla against others, where in reality what happened were clashes between opposing football ultras.

The same methods were used in late February 2011, by Polisario acolytes to disrupt the tranquility of the region, during the Cultural Festival “Sea and Desert.”

It seems that the Polisario and its backers are waiting for the occurrence of any incident in the Sahara in order to exploit it and use  it as a weapon to point to purported abuses of human rights by Moroccan authorities. This is not the first time that the Polisario had jumped on these kinds of events to try to undermine the legitimacy of Morocco regarding the Sahara conflict.

The incident in the Saharan city was somewhat reminiscent to clashes with police last year in November in the contested region. On Monday 8 November 2010, a confrontation broke out with police in the city of Layoune when local authorities moved to dismantle an illegal camp of about 12,000 people who had been protesting the deterioration of their living conditions and the lack of housing.

The event, which resulted in the death of 11 law enforcement officers and 159 wounded, in addition to 2 civilian deaths among the protesters, was used by the Polisario front and its acolytes (especially Spanish media) to point out the “abuses of human rights” perpetrated by Morocco’s authorities against the Saharawi population. The Polisario claimd that the Layoune incidents resulted in the death of 36 Sahrawis, while 723 were wounded.

Later on, the reports released by Human Rights Watch and Amnesty International confirmed the death toll among Moroccan law enforcement official, as it was announced by the Moroccan government and concluded that  the numbers put forth by the Polisario and its acolytes were unfounded.

One has to read between the lines to understand why the Polisario is trying to exploit the Dakhla events. These events came against the backdrop of the weakening of the position of the Polisario and its legitimacy in the international arena. There is no doubt that after the start of the uprisings in the Arab world and its spread to Libya with  the ensuing fall of Gaddafi, the Polisario has been made orphan of one of its main backers. This is all the more so, since the outbreak of the Libyan revolution there has been many news reports and statements pointing to the involvement of Polisario mercenaries in repressing the Libyan uprising.

Last March, Ali Richi, former Libyan Minister for Migration, had denounced the presence of the Polisario mercenaries with the Gaddafi troops. Mr. Ali  asserted that the Polisario dispatched its mercenaries in order to help Qaddafi to suppress and kill his opponents. Mr. Errishi went on to condemn the Polisario members for their “hypocrisy in claiming to fight for freedom and progressive ideal, while joining the mercenary army that Qaddafi has paid to attack Libyan protesters and cling to power”.

In light of the setback suffered by the Polisario over the past eight months, many analysts concur that Morocco will emerge from the uprising taking place in the Arab world as the biggest winner in geostrategic terms, especially with regards to the Sahara conflict. Speaking about this conflict and the prospects for the Polisario to achieve its territorial goals at a lecture given in the University of Menéndez Pelayo in the Spanish City of Santiago de Compostela, Jesús Nuñez, director of the Spanish Instituto de Estudios sobre Conflictos y Acción Humanitaria, said that the  prospects of the Polisario to achieve the independence of the Sahara from Morocco are very dim. “No one single country seems to be ready to support a possible proposal in favor of the independence of this territory.”

Moreover, even the new leadership in Libya seems determined not to let the Sahara conflict stand in the way of building the Maghreb Arab Union. “The future of the Sahara can only be conceived under the sovereignty of Morocco”, NTC spokesman in London Guma al-Gamaty said on regional television in Laayoune in early September.

In the face of its weakening position as the annual debates on the United Nations Committee on Decolonization will start next week, and in order to counterbalance the potential flow of testimonies by petitioners and statements by delegates denouncing the Polisario involvement in helping Gaddafi, dropping the mask over its real nature, the Polisario leadership feels compelled to use the only asset at its disposal to weaken Morocco’s legitimacy in the Sahara, which is to resort to the claim of human rights abuses in the territory.

As the UN General Assembly’s Political and Decolonization Committee will start its annual debate, there is no doubt that Polisario and its backers will use the events that broke out in Dakhla for the purpose of both denigrating Morocco and overshadowing the involvement of this “progressive” movement’s mercenaries in bloodily quelling the Libyan revolution.

The fact remains that there are scores of Saharawis who live in the region, who benefit from social and economic programs being put in place by the Moroccan government over three decades, while at the same time they reserve their allegiance to the Polisario Front.

One can safely assume that the events that took place in Dakhla were instigated by some pro-Polisario activists whose main mission was to trigger them and provide the Polisario with an opportunity to sell to the world the idea that the whole Saharan community is pursuing the same goals, and spread the belief that Morocco would be violating their human rights. The Moroccan authorities have to take this factor into account and take all necessary precautions so as to avoid the occurrence of such events in the future.