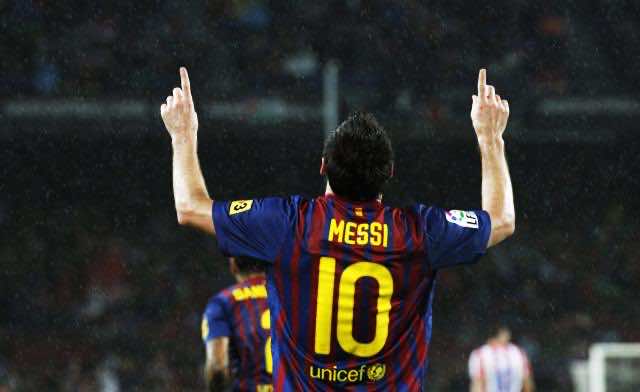 Lionel Messi has dismissed talk of chasing records after the Argentine struck twice in Wednesday’s 5-0 Champions League win at BATE Borisov to equal Ladislau Kubala as Barcelona’s second highest scorer of all time on 194 goals.

As the Spanish and European champions prepare to take on struggling Sporting Gijon in La Liga on Sunday, Messi said he was not focused on eclipsing top scorer Cesar Rodriguez, who scored 235 for the Catalan club, but merely wanted to perform for the team.

“Cesar is not my goal,” the 24-year-old World Player of the Year, who has netted his goals in only 280 appearances, was quoted as saying on Barca’s website (www.fcbarcelona.cat).

“It is to do things well in each match,” the Argentine added. “I know that I am making history and hopefully I can do more.”

Messi already has eight goals in five La Liga games this season, including two hat tricks, as Barca bid for a club record-equalling fourth consecutive domestic title.
After a couple of away draws they are second on 11 points, one behind surprise leaders Real Betis, who host Levante, also on 11, earlier on Sunday.

Messi made his debut for Barca’s first team in October 2004 and became the club’s youngest league scorer when he netted against Albacete in May 2005 at the age of 17 years, 10 months and seven days.

A string of breathtaking performances has landed him the world’s best player award the past two seasons, and he has top-scored in the Champions League, Europe’s elite club competition, the past three campaigns, when Barca twice won the title and reached the semifinals.

“What Messi is doing is extraordinary, accumulating these numbers and playing for the team,” Spain midfielder Xavi, one of Barca’s club captains, said after the BATE game. “Having the best footballer in the world is priceless.”

Striker David Villa, Xavi’s Spain and Barca teammate, added: “Messi is incredible. He will keep exceeding himself. We are just happy to help him out in all this.”

Barca could be without Carles Puyol for Sunday’s game in Gijon after the shaggy-haired centre back, who has only just returned from knee surgery, picked up a knock in Minsk.

Puyol’s defensive partner Gerard Pique, however, could make his first start since recovering from a calf strain.

Jose Mourinho’s Real Madrid, who are fifth on 10 points, warmed up for Sunday’s match at Barca’s city neighbours Espanyol with a 3-0 win at home to Ajax in Champions League Group D on Tuesday.

Sevilla, level with Levante on 11 points, play at Atletico Madrid on Sunday, while Valencia, on 10, host promoted Granada on Saturday following Wednesday’s 1-1 Champions League draw at home to Chelsea.