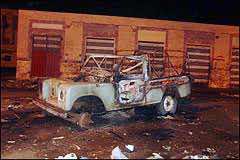 Moroccan authorities announced the arrest of  25 people for their role in a riot following a soccer game that left seven people dead.

The events of the city of Dakhla began Sunday, September 25 by clashes between residents of two neighborhoods in the city, after a football match between the local team Mouloudia Dakhla and Chabab of Mohammedia, a meeting which ended in victory for the visitors three goals to nil.

After the game between the local Mouloudia club and a club from the northern city of Mohammedia, rival supporters began throwing stones at each other.

Among those killed there were two policemen. Three people also died after being run over by four-wheel vehicles driven by people with criminal records, according to a statement carried by the Maghreb Press news agency.

Violent clashes broke out again Monday September 26 at 1:30 a.m. causing several injuries and the sacking of dozens of vehicles, homes and public buildings.

Analysts told Morocco World News that sympathizers of the Polisario are most likely behind these tragic clashes.