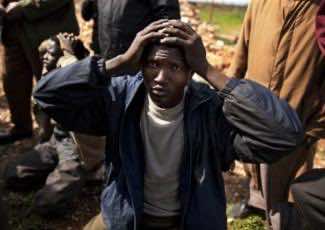 People suspected of having fought for Muammar Gaddafi, in particular black Libyans and sub-Saharan Africans, were at high risk of abuse by anti-Kadhafi forces, Amnesty International said on Tuesday.

In recent visits to detention centres in Zawiyah and Tripoli, the group was told that between one third and half of those detained were from sub-Saharan Africa, the rights body said in a statement.

“An Amnesty International delegation visiting the Central Tripoli Hospital witnessed three thuwwar revolutionaries, as the opposition fighters are commonly known, dragging a black patient from the western town of Tawargha from his bed and detaining him,” the statement said.

“The thuwwar said the man would be taken to Misrata for questioning, arguing that interrogators in Tripoli ‘let killers free’.

“Two other black Libyans receiving treatment in the hospital for gunshot wounds were warned by the anti-Gaddafi forces that ‘their turn was coming’.”

Amnesty official Claudio Cordone was quoted as saying: “We have to fear for what may be happening to detainees out of the sight of independent observers.”

Sub-Saharan Africans are particularly vulnerable to abuses, Amnesty said. “Many risk reprisals as a result of allegations that Gaddafi forces used ‘African mercenaries’ to commit widespread violations during the conflict.”

Amnesty welcomed calls by the National Transitional Council (NTC) for its supporters “to treat captives with dignity and to avoid revenge attacks”.

“But the council must do more to ensure that their fighters do not abuse detainees, especially the most vulnerable ones such as black Libyans and sub-Saharan Africans,” Cordone said.

“Fighters engaging in abuses should be immediately removed from active duty, pending investigation,” he added. “All crimes, no matter who committed them, should be investigated and those responsible brought to justice.”