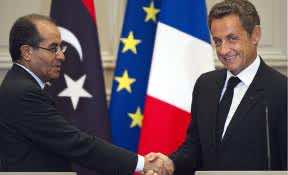 Leaders of the Libyan uprising that overthrew Muammar Gaddafi sit down with world powers on Thursday to map out the country’s rebuilding, 42 years to the day after the former strongman seized power in a coup.

French President Nicolas Sarkozy and British Prime Minister David Cameron, whose gamble to spearhead the West’s intervention in Libya paid off this week when Gaddafi was driven from power, are hosting delegations from 60 countries and world bodies.

A tight three-hour agenda focuses on political and economic reconstruction, with Western powers anxious to avoid mistakes made in Iraq — but talks on the sidelines may expose early jostling for opportunities in sectors like oil, utilities and infrastructure.

“You know this operation in Libya costs a lot. It’s also an investment in the future because a democratic Libya is a country that will develop, offering stability, security and development in the region,” Juppe told RTL radio.

Libya, which boasts large reserves of top-quality crude oil, has been left badly underdeveloped by Gaddafi, who as a young army captain ousted Libya’s King Idris on September 1, 1969.

French daily Liberation published a story saying Libya’s ruling interim council agreed in April to give France priority access to 35 percent of Libyan oil in return for its backing. But the council flatly denied the report and France’s foreign minister said he knew nothing about it. French diplomatic and oil industry sources also said the report sounded false.

The world’s eyes will be on Libya’s interim Chairman Mustafa Abdel Jalil and interim Prime Minister Mahmoud Jabril, as the “Friends of Libya” conference gives the NTC its first major platform to address the international community a week after its forces overran the Libyan capital and drove Gaddafi out.

Jalil will open the afternoon talks with an outline of the NTC’s roadmap, which targets a new constitution, elections within 18 months and ways to avoid reprisals. He will address an evening news conference along with Sarkozy and Cameron.

U.S. Secretary of State Hillary Clinton will be at the talks along with European and African leaders and the heads of NATO, the United Nations and the European Union. Russia and China, which opposed the NATO intervention, will also be represented.

In another step for Libya’s transition, Russia recognised the interim council as the legitimate authority on Thursday and Algeria, which has dragged its heels on the issue, said it would recognise a broad-based government that the interim rulers were now hoping to form.

Eager to meet immediate civilian needs, the NTC is expected to push for rapid access to billions of dollars in foreign-held Libyan assets frozen under U.N. sanctions on Gaddafi.

Other European countries may follow suit, and while the Paris talks are not supposed to be about funding pledges, some assistance or loans may be promised to aid the NTC, which is using money unfrozen earlier in France to buy wheat.

The European Union, which has sent some 150 million euros in aid to Libya, is preparing measures to help with justice, policing and security, education and financial management.

While officials are adamant the Paris meeting is about securing political stability in Libya and doing things differently than in Iraq, French companies are planning a trade mission to get a head start on reconstruction contracts.

As well as big prospects for developing oil drilling, the end of the six-month conflict will open up big opportunities for infrastructure, construction, electric power, telecoms, water and tourism companies who are keen to challenge the privileged position enjoyed by Italian firms under Gaddafi’s long rule.

The NTC has said those who took a lead role in backing their revolt will be rewarded. While Paris has sent company representatives to assess the situation, Britain is not planning any missions until the conflict is completely over.

“It seems that Britain is always slow out of the traps, although we are good at the over-arching politics,” said John Hamilton, a director of research firm Cross-border Information, noting the banking sector would also be ripe for development.

“If someone can say Tripoli is safe, people will be out there as soon as possible.”

The NTC told Reuters the Liberation report of an oil deal with France was nonsense. “It’s a joke. It’s false,” said NTC spokesman Mahmoud Shammam, who along with Jabril was mentioned by name in the letter. He said such a deal was unthinkable.

“I am not aware of this letter,” Juppe told RTL. “What I know is the NTC said very officially that concerning the reconstruction of Libya it would turn in preference to those who helped it. That seems fair and logical to me. We’re not alone. Italy is also there, (and) the Americans.”