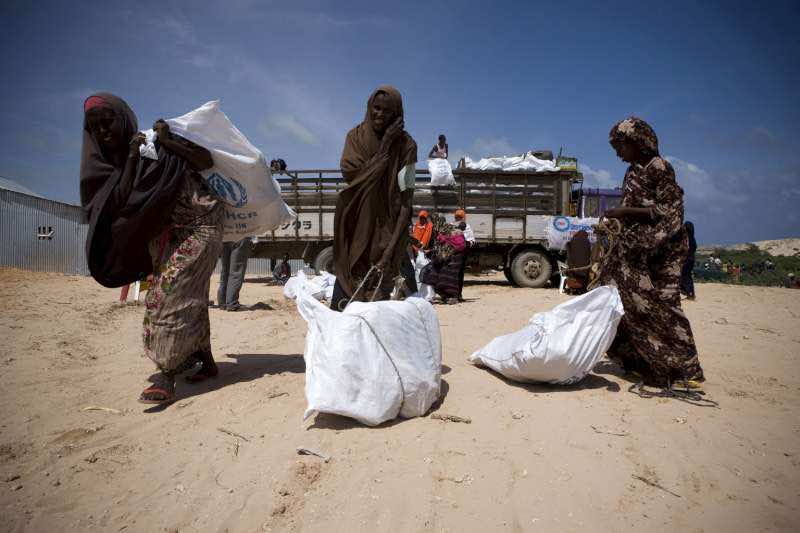 The United Nations refugee chief has called for a rapid increase in aid for Somalis uprooted by drought, famine and conflict, as he visited the capital, Mogadishu, which is hosting some 400,000 internally displaced persons (IDPs).

“We are seeing here a deadly combination of conflict and drought and the misery is out of proportion to what is being done,” High Commissioner for Refugees António Guterres said yesterday as he met with IDPs sheltering on the grounds of Mogadishu’s crumbling cathedral.

“The whole humanitarian community needs to scale up assistance to reach people wherever they are in Somalia,” said Mr. Guterres, the first head of the UN refugee agency, known as UNHCR, to visit the Somali capital since the 1990s.

Tens of thousands of people have already died and some 3.2 million others are thought to be on the brink of starvation in Somalia, one of several countries in the Horn of Africa that is facing a food security crisis.

More than 12 million people across the region are estimated to need outside humanitarian assistance, and a state of famine has been formally declared in five regions of southern and central Somalia, including the area in and around the capital, Mogadishu.

While in Mogadishu, Mr. Guterres pointed to the “enormous difficulties of access and capacity” for aid workers trying to help the needy amid insecurity. “My main worry is if there is not enough assistance the humanitarian tragedy we are witnessing will get worse,” he said.

Aid agencies are continuing with their efforts to assist the millions in need in Somalia and the wider Horn of Africa. A ship transporting 381 tons of food for the UN World Food Programme (WFP) operations in the region was set to depart today from France for Djibouti, which it should reach in around 12 days.

Most of this food – which includes wheat flour, sugar, rice and vegetable oil – is a French in-kind contribution that will help WFP to feed 22,600 people in Somalia for one month, said the Rome-based agency.

The ship will also carry 66 tons of rice – a contribution from the French Red Cross to WFP operations in Djibouti, where the agency assists 109,000 people, including 16,000 refugees.