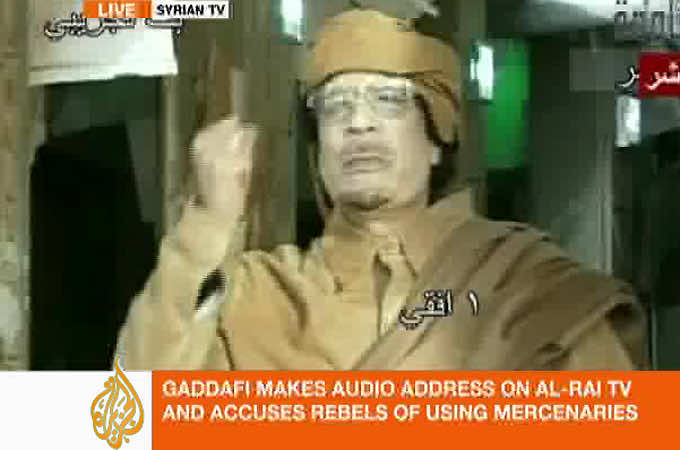 Muammar Gaddafi has urged his supporters to keep up their resistance to the uprising in Libya that has forced him into hiding, the Syria-based Al-Rai television channel said.

The toppled leader asked his supporters to continue what he called “struggle against foreign aggression” and said those against him were divided, he was quoted as saying in a message.

He vowed again not to surrender, saying he would carry on fighting, the pro-Gaddafi television channel said.

“Even if you cannot hear my voice, continue the resistance,” Gaddafi said.

“We will not surrender. We are not women and we are going to keep on fighting,” the message said.

Gaddafi called on his supporters to set Libya alight, vowed that his backers would not give up, he said in the message.

“Let there be a long fight and let Libya be engulfed in flames.” He said the “balance of power is now leveled as all tribes are now armed”.

The pro-Gaddafi station carried written extracts from a message from the fallen leader, saying it would be broadcast later.

The fugitive leader was speaking on the 42nd anniversary of the military coup that toppled King Idris and brought him to power in 1969 when he was a 27-year-old army captain.

There have been conflicting reports about Gaddafi’s location since his Tripoli compound was overrun on August 23.

A senior military commander of the Libyan interim leadership said Gaddafi was in a desert town outside Tripoli, along with his son Saif al-Islam and intelligence chief Abdullah al-Senussi, planning a fight-back.

All three fugitives are wanted by the International Criminal Court for alleged crimes against humanity.

Abdel Majid Mlegta, co-ordinator of the Tripoli military operations room, told Reuters news agency “someone we trust” had said Gaddafi had fled to Bani Walid, 150km southeast of the capital.

He said Ali al-Ahwal, Gaddafi’s coordinator for tribes, was also in Bani Walid, a stronghold of the powerful Warfalla tribe, Libya’s biggest tribe among a population of six million, but many say their loyalty is divided.

“We are capable of ending the crisis but military action is out of the question right now,” Mlegta said.

“We cannot attack this tribe because many of our brigades in Benghazi and Zintan are from Bani Walid. The sons of Bani Walid hold the key.”

An Algerian newspaper said Gaddafi was in the border town of Ghadamis and had tried to call Algerian President Abdelaziz Bouteflika to appeal for refuge.

Bouteflika would not take the call, even though Algeria gave sanctuary to Gaddafi’s wife and three of his children when they crossed the border on Monday.