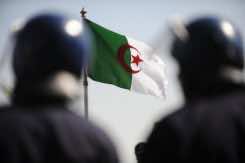 ALGIERS, Algeria — A group that monitors militant media says Al-Qaida’s North African branch is claiming to have killed or wounded scores of Algerian security forces in 32 attacks since early July.

The SITE monitoring group reported Thursday that extremist websites carried a statement dated Wednesday by Al-Qaida in the Islamic Maghreb.

The statement claims the attacks between July 7 and Aug. 29 killed or wounded more than 200 people.

Algerian authorities could not immediately be reached for comment. The country has seen a rise in attacks and clashes with militants in recent months, reported by security officials and local media.

The worst were twin suicide bombings on a military academy in Cherchell that authorities said killed at least 18 people.