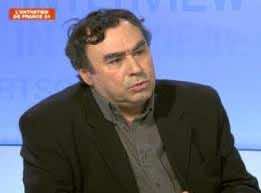 In one of his first statements on the stance taken by the Algerian government regarding the situation in Libya, French historian, Benjamin Stora says that Algerian officials continue to analyze the world through the lenses of bygone criteria and have shown themselves to be “myopic” with their attitude in the face of the conflict in Libya.

In an interview given to the French daily le Figaro, he said that Algerian officials have shown the extent of their shortsightedness and their commitment to an outdated reading of international relations.

Mr. Stora went on to explain that Algeria’s “ambiguous” position is due to the ideological underpinning of the Algerian regime and the cultural matrix of the government that has “changed little since the days of former President Boumediene.”It may seem hard to believe, but Algerian leaders give the impression of ignoring the new geopolitical situation, whether the fall of the Berlin Wall, the end of the Cold War, the election of Barack Obama”, he said.

He also said went on to say that Algeria’s establishment is divided on how to deal with the political turmoil shaking their immediate neighbors. In Algeria “the conservative movement calls the shots, but it does not necessarily represent the army. There are Islamic-conservative or old Arab nationalists who are still in power, who cling to the past and who do not understand the aspirations for change of Arab youth, especially the large and educated Berber youth.”

Regarding the political situation in Algeria, Stora stated that the reforms announced by the government are “simple window dressing”. He also acknowledged that although there is a strong aspiration for change by the Algerian people, change in Algeria will not come about at the same pace as in other Arab countries. “In the face of the stagnation of the regime, there is a strong desire for change, but change will not happen at the same pace. Algerians have given much in the past. The war of independence, the Berber Spring, the introduction of multiparty politics in 1988, the trauma of the civil war of the 1990s still hangs over Algerian society,” he said.

However, “as Algerians are increasingly shocked by the repression in Syria, following with interest the democratization process in Tunisia and fear a possible isolation of their country on the international stage,” he wondered if, “one can rule out the possibility of change in Algeria under the current circumstances”.

Since the beginning of the Libyan uprising, Algeria has shown no sympathy with the rebels. Instead, it continued to consider Gaddafi as the legitimate leader of the Libyan people and held back from calling for his departure.

Out of the 22 countries of the Arab League, Algeria along with Syria were the only countries to vote “no” last March when the pan-Arab organization approved an internationally sanctioned no-fly zone over Libya to protect the rebels and protesters.

Since the National Transitional Council took over Tripoli 11 days ago, the Algerian government has been reluctant to recognize the NTC as the legitimate government of the Libyan people.

As of today, Algeria has still not recognized the NTC. Algerian Foreign Minister, Mourad Medelci, was quoted on Thursday as saying that the recognition by Algeria of the NTC is contingent on the formation in Libya of a government that represents all sensitivities, including Gaddafi followers.

Since the start of the Libyan revolution, NTC officials have been accusing Algeria of backing Muammar Gaddafi in the country’s civil war, an allegation Algeria has denied.

In a move that was described by many as an uncalculated political gamble by the Algerian regime, on Monday the latter allowed Gaddafi’s wife Safia, his daughter Aisha, son Hannibal and their children to take refuge in Algeria .

On Tuesday the NTC considered the decision to host family members of ousted Libyan leader as a “hostile act” by Algeria.

Om Thursday, the Maghreb Arab Press reported that the Rally for Culture and Democracy opposition party (RCD) had criticized the decision of the Algerian authorities to accommodate family members of Colonel Muammar Gaddaf.