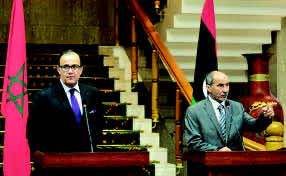 Foreign Minister, Taib Fassi Fihri expressed Thursday in Paris Morocco’s support for the new Libya, saying that the Kingdom will spare no effort to help this brotherly country regain its international stature.

“We will support the Libyan brotherly people at the multilateral level, notably within the UN, so that Libya can regain its stature among nations through its legitimate representatives from the National Transitional Council (NTC),” Fassi Fihri told the press following the high-level International Conference in support of the new Libya, co-chaired by French President Nicolas Sarkozy and British Prime Minister David Cameron.

“Morocco will also help in the setting up of an international programme in support of the Libyan people,” said El Fassi, noting that Morocco’s support at this stage will concern the economy, rebuilding and the rule of law.

Fassi Fihri, who accompanied the Head of the Government Abbas El Fassi, praised the efforts led by several countries to back Libya’s transition, adding that Morocco’s willingness to help Libya stems from common history and the goal of achieving common Maghreban ambitions.

The Moroccan official highlighted Libya’s rebuilding should start with the adoption of a new constitution and a development plan. In this respect, he said, “Morocco voiced readiness to back the new experience of the Libyan brotherly people at the economy, human, security and training levels.”

Recalling the support of the Kingdom for the aspirations of the Libyan people, Fassi Fihri said that “thanks to the vision of HM King Mohammed VI, Morocco has adopted a clear stance and has never derailed.”
The Kingdom “was the only African country to take part in the March 19 conference in Paris” and has participated in all Libya Contact Group meetings since the Group’s creation on March 29 in London, he underscored.

“Since the beginning of the revolution, Morocco has emphasized  the importance of Libya’s NTC’s actions and has listened to its members to learn about their stand points and analysis.”

Fassi Fihri said that “Morocco, which has frozen Libyan assets, has never suspended the activity of Libyan institutions,” so as not to affect investments and the employment they create.

Morocco “has unlocked the assets early in order to pay Libyan students and employees in Morocco,” added the Minister.

“Now, It is up to Libya’s new authority to decided if there should be further investments and how they intend to use these assets,” said Fassi Fihri.

At the diplomatic level, the Minister said that he has taken note that Libya’s Embassy in Morocco represents the NTC, pointing that Morocco did not close its Embassy in Tripoli.