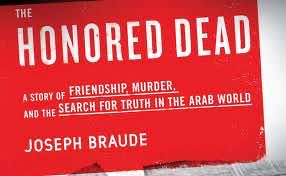 The Arabic-speaking American writer Joseph Braude managed to get himself embedded with the equivalent of the FBI in the kingdom of Morocco.

His book, the Honoured Dead is simultaneously a murder story and a portrait of how justice works in such a society.

MARK COLVIN: If post-Gaddafi Libya is to succeed, it can only do so with the rule of law.

It will need a police force without corruption, and a transparent legal system to assure citizens that they really are living in a country that’s thrown off dictatorship.

The same is true of countries like Egypt and Tunisia, whose revolutions started earlier.

But there are few, if any models in the Middle East or North Africa that they can build on.

For an insight into one North African country’s justice system, the Arabic-speaking American writer Joseph Braude managed to get himself embedded with the equivalent of the FBI in the kingdom of Morocco.

His book, The Honoured Dead is simultaneously a murder story and a portrait of how justice works in such a society.

He told me about the role of the police.

JOSEPH BRAUDE: What was immediately obvious is that in addition to their traditional role of keeping the streets free of crime, the police also presume to be guardians of the social fabric, that is that they’re controlling the society, policing the culture itself, in addition to their role in guarding the autocrat from his own population.

MARK COLVIN: Guarding the social fabric is something that we wouldn’t necessarily put onto our police or we might not even trust our police with it; what does it mean?

JOSEPH BRAUDE: Well for example when a 17-and-a-half year old girl has run away from her parents after it came out that her boyfriend had had sex with her, they’re not only concerned to catch the boyfriend, who may be accused of statutory rape but also to protect the girl from her own family, from what has become known as an honour killing, when a girl’s virginity is lost out of wedlock. And this is a security matter that will carry on for months or years where members of the family may pursue her in order to avenge the family’s honour.

JOSEPH BRAUDE: Nor are the names of the judges or the police so it’s rather a strange crime section of each newspaper in that nearly every proper noun is blotted out. This is attributed by the police with whom I spent time once again to cycles of vengeance which remain a problem in the rural areas as well as portions of the big city where many rural migrants live. And so the idea is that if the names of families are kept quiet, it becomes more difficult for these traditional forms of justice to be employed by the population.

MARK COLVIN: But if trials aren’t transparently held how can people have faith in the administration of justice?

JOSEPH BRAUDE: Well it’s a paradox that is particularly difficult to reconcile these conflicting issues in a dictatorship or in an autocracy where the government itself is lacking in legitimacy and the courts are notoriously corrupt.

MARK COLVIN: As you say in an autocracy, and there are a lot of autocracies in the Arab world, if the ruler wants somebody to be found guilty or not-guilty that can just happen.

JOSEPH BRAUDE: Yes, I remember being in Iraq in fact years ago and reading a legal affairs journal published under the former regime of Saddam and it has a quote from Saddam that says justice is above the law, which is an interesting way of thinking about but what it really means is that the justice of the ruler is above the law, which is an idea antithetical to the concept of the rule of law.

MARK COLVIN: So they don’t mean justice as in blind justice?

JOSEPH BRAUDE: It means a subjective form of justice that is between the ears of the head of state and the elites that surround him.

MARK COLVIN: Alright is that in the DNA or in a country like Libya for instance which now has to completely remake itself, can other forms of justice be brought in do you think?

JOSEPH BRAUDE: Sure. I don’t think that it’s in the DNA. I think that every population strives to achieve these universal values, even though the language, the political lexicon may be different and the journey toward the realisation of those values can be greater.

MARK COLVIN: Does Libya now have a blank slate? Is it actually an advantage that it’s had a revolution?

JOSEPH BRAUDE: Some people believe that it can be; revolutions present opportunities but you mentioned the judiciary – no revolution in the world has succeeded without establishing the rule of law; many think that they can but that becomes one of the most important things to strive for early on.

MARK COLVIN: You spent so much time in Morocco and you got deep, deep into the heart of the judicial system, the police system; what was your feeling about whether the Arab Spring can move to countries like Morocco?

JOSEPH BRAUDE: Within a country like Morocco, where the king is benign on the spectrum and human rights groups have acknowledged some improvements, there’s the potential to use the king as a means to achieve gradual change. So there was a recent constitutional referendum in which the king offered to split the difference with the population, sharing power with an elected prime minister. This presents an opportunity to move forward in building civil society and gaining authority for the population without risking total chaos.

In kingdoms like Morocco, perhaps Jordan, where the ruler enjoys a measure of legitimacy there is hope that he can steer the country in the right direction slowly. On the other hand in the military republics what we’re seeing in Syria for example, what we saw in Tunisia and Egypt, these regimes are paper thin, they lack legitimacy, they’re not ingrained in the cultural fabric the way the dynasties are and it’s much more difficult to see these heads of state as shepherds of a civil society.

MARK COLVIN: Joseph Braude, the author of the book The Honoured Dead.