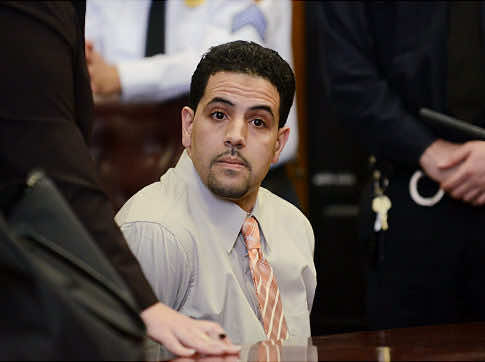 As one might imagine, agreeing to go to prison is a decision a person might easily balk at.

Yet almost daily, defendants in court plead guilty to crimes and agree to serve time, some begrudgingly, others acquiescently and a select few happily.

Mbarek Lafrem, a native of Morocco who had been arrested in Manhattan, was the picture of ambivalence when it came to accepting punishment.

Mr. Lafrem, 32, pleaded guilty in July to attacking a woman in the restroom of a Midtown bar, and the judge, Justice Ronald A. Zweibel of State Supreme Court in Manhattan, said he would be sentenced to 16 years in prison. But on Thursday, Mr. Lafrem, mumbling and visibly agitated, asked Justice Zweibel if he could withdraw his guilty plea.

In court, Mr. Lafrem’s lawyer, Yana A. Roy, said she did not quite understand her client’s reasoning and did not support his request to renege on his plea. Outside court, Ms. Roy said she believed he was having a difficult time dealing with the length of the sentence. This arrest was Mr. Lafrem’s first time behind bars, Ms. Roy said.

Mr. Lafrem gave the judge a lengthy letter explaining why he wanted to withdraw his guilty plea.

Justice Zweibel took a few moments to read it. He quickly flipped through some of the pages. At times while reading, he inhaled deeply and breathed out heavily.

Then he said, “I find no merit to the papers whatsoever.” Referring to what Mr. Lafrem had conceded to about the crime, the judge continued, “The defendant was fully allocuted by this court when the plea was taken.”

Justice Zweibel said he would not revoke the plea deal.

Before the judge formally imposed the 16-year sentence for first-degree assault and attempted sexual abuse — after the completion of which Mr. Lafrem is to be deported to Morocco — Shanda Strain, an assistant district attorney, provided her interpretation of the defendant’s change of heart.

“It does appear to be a boilerplate motion filed by many defendants who are often having buyer’s remorse, so to speak, after having time to contemplate their plea,” Ms. Strain said. “It appears to be a last-ditch effort.”

When Justice Zweibel asked if he had anything to say, Mr. Lafrem spoke a few words that could not be heard in the courtroom gallery. Later, Ms. Roy quoted him as saying, “Whatever the judge decides, that’s the way it’s going to be.”

According to prosecutors, Mr. Lafrem punched a 29-year-old woman several times in March 2010, leaving her unconscious and with her slacks partly removed in a restroom at Social, a bar on Eighth Avenue between 48th and 49th Streets.

Thursday was not the first time that Mr. Lafrem had reconsidered a decision to plead guilty.

At an earlier hearing, he had gone to court ready to accept a plea deal, his lawyer said, only to decide against it. The difficulty then, Ms. Roy said, was that Mr. Lafrem did not want to admit to attempting to sexually abuse the woman because he was a Muslim and his faith considers that crime to be one of the ultimate acts of wrongdoing.

The lawyers had in fact arranged a plea in which Mr. Lafrem would have had to concede only that he could have been found guilty of trying to sexually abuse the woman if the prosecutors had been able to prove certain things, Ms. Roy said. But at that hearing, there was no interpreter to properly explain that to Mr. Lafrem.

On Thursday, an interpreter was by his side.

But as he left the courtroom, he wore a scowl on his face and grumbled to himself, his hands cuffed behind his back.