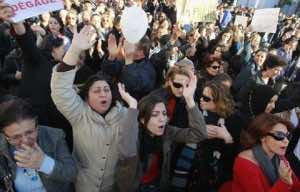 TUNIS– A young woman was killed and several people were wounded in Tunisia overnight when soldiers opened fire to break up street fighting that involved hundreds of people in a provincial town, residents and officials said on Friday.

Crowds angered by the bloodshed then set fire to a police station, buses and a hospital in Sbeitla, 200 km (130 miles) southwest of Tunis, local people said.

The reasons for the initial clashes were unclear, though some residents blamed supporters of deposed president Zine al-Abidine Ben Ali for trying to destabilise the country ahead of elections to a constitutional assembly in late October.

The accusation has been a common one to explain a rise in violent incidents in the once heavily policed country since Ben Ali fled in January. He was overthrown by an uprising that began in Sidi Bouzid, a city 40 km (25 miles) from Sbeitla.

“The army tried to break up fights between people from the town and opened fire, killing a 16-year-old girl named Soussan Souidi,” local man Adnan Hlali told Reuters by telephone. “Many people were wounded, including two in a critical condition.”

The Interior Ministry confirmed that the girl had died. It did not say that she had been hit by fire from the troops.

Another resident said the clashes in Sbeitla, a town of some 40,000 people, began on Thursday evening as people were concluding the three-day Muslim holiday of Eid al-Fitr. The violence went on through the night. By Friday, more security forces had arrived and the situation was under control.

In a separate development, hundreds of people in the southern desert town of Douz fought with knives and shotguns in what appeared to be a tribal dispute that left 40 people wounded, a Tunisian security source said.

The authorities imposed an overnight curfew on the town which lies about 400 km south of Tunis.