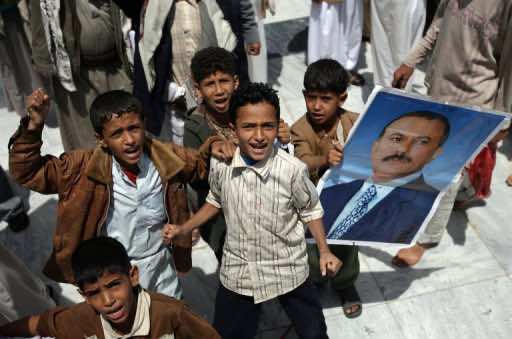 Hundreds of thousands of Yemenis staged rival rallies on Friday, with massive crowds demanding President Ali Abdullah Saleh step down and as many people turning out in support of the ailing leader.

Vast crowds of anti-regime protesters also turned out further north in the capital in support of what the opposition dubbed the Friday of “escalating the revolt.”

“Sanaa revolt revolt towards the presidential palace,” they chanted. “The people want to settle” the revolt.

Saleh, who has been in Saudi Arabia since early June for treatment after he was wounded in a bomb attack on his Sanaa compound, on Tuesday accused his opponents of being corrupt and arms dealers.

He also accused them of exploiting youthful protesters demanding his ouster, in a televised address after he had vowed earlier in August to return “soon” to his impoverished country.

Despite his absence, Saleh has not transferred power to his Vice President Abdrabuh Mansur Hadi, and his family members who lead strong army and security forces appear to be running Yemen.