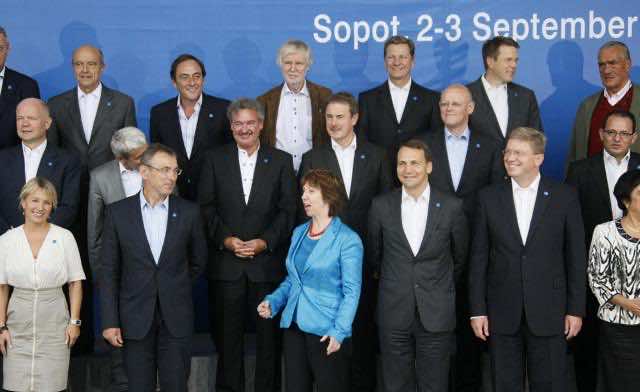 The European Union decided to impose sanctions on Syrian oil exports on Friday, saying President Bashar al-Assad was massacring his own countrymen.

“The sanctions have been agreed,” an official said in the Polish resort of Sopot where EU foreign ministers met to set out their response to Assad’s military crackdown on five months of protests against his 11-year rule.

“President Assad is carrying out massacres in his own country,” Polish Foreign Minister Radoslaw Sikorski said. “The whole international community is urging him to relinquish power.”

As the EU tightened the economic screw on Assad, demonstrations broke out in several parts of Syria, mainly in rural regions because of a heavy army presence in urban areas, activists and residents said.

Syria’s official SANA news agency said three members of the security forces were killed when their bases near Damascus and in Homs came under attack. A resident near one of the incidents said only security forces had opened fire.

Syria has expelled foreign media, making it hard to verify accounts of the unrest in which the Britain-based Observatory says 2,000 civilians have been killed as well as 463 soldiers and police — some by anti-Assad gunmen and others by security forces for refusing to shoot demonstrators.

“Death rather than humiliation!” chanted protesters in the village of Kfar Zita in Hama province, according to a YouTube video released by residents.

“Oh mother, Bashar is in his last days,” chanted a crowd in the town of Kfar Nubbul in northern Idlib province, carrying a banner that compared the modest international response to Syria’s uprising compared to interventions in major oil states.

“If we don’t have oil like Iraq or Libya, don’t we deserve to live?” it said.

The EU has already banned Europeans from doing business with dozens of Syrian officials, government institutions and military-linked firms it says are tied to the violent repression of the protests.

Four people and three entities were added to that sanctions list on Friday, the EU official said.

“Any step that harms the regime is welcome on the street level, especially since all state resources are now geared to repress the people,” said Akram Izzedin, an activist in Damascus.

“Assad and his cohorts treat the oil sector as (their) property… The people have seen no benefit from it.”

Friday’s steps are the first time the EU will target Syrian industry but the sanctions do not go as far as the investment ban imposed by the United States last month.

European firms like Anglo-Dutch Royal Dutch Shell and France’s Total are significant investors in Syria. So far, the threat of sanctions on Syria has had a limited impact on oil markets as the country exports just 150,000 barrels per day, out of around 400,000 bpd it produces

Most of the exports currently go to Germany, Italy and France, so the EU embargo will disrupt a major source of foreign currency for Syria. It may be able to find new markets in Asia for its crude, but would have to offer discounts and it would take time to agree contracts.

“They have enough foreign reserves in the bank to support them (while) they look for alternative buyers,” said Julien Barnes-Dacey, Middle East analyst at Control Risks in London.

“But it does point to the significant challenges that they face. The regime is finding itself increasingly encircled regionally and internationally.”

France said it was pushing for a UN Security Council resolution that sets up United Nations sanctions against Syria — something which veto-wielding council members Russia and China have so far resisted.

US Secretary of State Hillary Clinton urged European and other countries on Thursday to impose more sanctions on Assad’s government, saying more pressure was needed to make him quit.

No Middle Eastern country has followed the US and EU lead in calling for Assad to stand aside, and British Prime Minister David Cameron said on Friday that Arab nations were less willing to act than they were in the case of Libya.

But he said that during conversations with Arab leaders at a meeting in France to discuss Libya after Muammar Gaddafi’s fall, he detected a hardening line against Assad.

“I think they are toughening their stance because they realise that what he is doing is appalling,” Cameron told the British Broadcasting Corporation.

“They realize that he had his chance to demonstrate he was in favor of reform and he has completely failed to do that.”

Assad, 45, inherited power from his father and retains the loyalty of the core of his armed forces, whose commanders are mostly from his own Alawite minority.

Last month he sent the army into several cities to crush dissent. The Syrian Observatory for Human Rights said 473 people were killed, 360 of them civilians.

The group also asked for an investigation into the deaths of 113 members of security forces, saying there were accounts of gunmen attacking soldiers and police, as well as security forces shooting troops who refused to fire on protests.

Despite the repression, demonstrators have been encouraged by Gaddafi’s fall and the rising international pressure on Syria, including Friday’s EU sanctions.