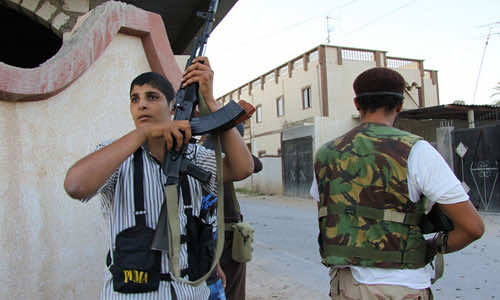 Libya’s National Transitional Council (NTC) has said it is close to making a deal with forces still loyal to toppled leader Muammar Gaddafi to gain control of the strategic town of Bani Walid.

In nearby Tarhouna, a military base formerly under the command of Khamis Gaddafi, son of the former ruler, has been taken over by NTC fighters.

“There are negotiations between us and what remains of Gaddafi’s forces there,” Abdulraziq Anndouri, an NTC military commander told Al Jazeera.

“We hope they surrender so there is no more blood spilled, and that they escape to the desert and leave the civilians alone.”

In case negotiations fail, fighters continued to gather to the north and east of the town, where Gaddafi forces are alleged to have carried out a massacre on May 28.

“The fighters are waiting and watching the negotiations, hoping they will be successful and Gaddafi’s men will lay down their arms.” said Al Jazeera’s Sue Turton from Tarhouna.

“If not they will move up the road [from Tarhouna] to Bani Walid to attack, and more blood will be spilled.”

The interior and security minister of Libya’s NTC has said that fighters from elsewhere who helped to liberate Tripoli, the capital, should begin going home front Saturday.

“Starting Saturday there will be a large number of security personnel and policemen who will go back to work,” Ahmed Darrad said in Tripoli on Friday.

“Now the revolutionaries of Tripoli are able to protect their own city,” Darrad said.

The demand comes as leaders of the NTC said they would move to Tripoli, pledging to restore order and stage elections in 20 months.

“We will go to Tripoli next week. Tripoli is our capital,” Mustafa Abdel Jalil, NTC chairman, told dignitaries and tribesmen in the eastern city of Benghazi on Friday.

The NTC is reportedly building its foreign relationships in order to negotiate and renegotiate energy deals, as Libya’s economy largely depends on oil exports.

The talks, announced on Saturday at a regional summit in Tajikistan, are planned to discuss the future of energy contracts signed during Gaddafi’s rule.

“They suggested holding meetings. We invited representatives to Moscow on their request. We will discuss all this with them,” Lavrov said.

The idea for talks had come from Libyan officials, Lavrov was quoted as saying.

Russia on Thursday recognised the NTC as the legitimate government of Libya, three months after some Western states.

Before the conflict broke out in Libya, Russian energy giant Gazprom sealed a deal with Italian energy concern Eni to acquire 33 percent of Eni’s shares in Libya’s Elephant oil and gas field project worth 113 million euros.

That deal has remained in the air as it needs approval from the Libyan side.

The NTC had signalled that countries which supported the NTC during the six-month conflict would have the priority in regard to energy projects.