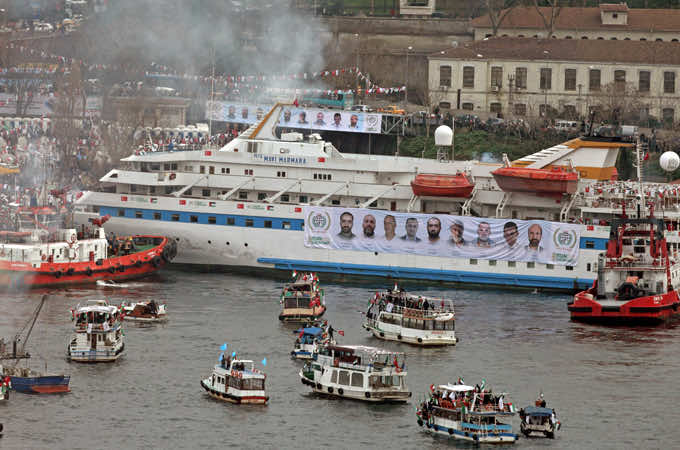 Turkey and Israel should improve their diplomatic ties and accept the recommendations of a UN report which looked into the deaths of nine Turks in the Israeli attack on a Gaza-bound ship, the UN secretary-general has said.

Ban Ki-moon said strong ties between Turkey and Israel, which both share a border with Syria, were important for the Middle East.

“I sincerely hope that Israel and Turkey will improve their relationship,” Ban told reporters in Canberra, Australia, on Saturday after talks with Julia Gillard, the Australian prime minister.

Ban said he would make no comment on the specifics of the report, written by a panel headed by Geoffrey Palmer, a former New Zealand prime minister.

“My only wish is that they should try to improve their relationship and do whatever they can to implement the
recommendations and findings of this panel’s report,” he said.

The report found Israel’s naval blockade of the Gaza Strip was “legal”, but that Israel used unreasonable force when its commandos raided the ship, despite meeting strong resistance from those on board.

The rift between Turkey and Israel comes despite US efforts to encourage a rapprochement between the two regional powers whose co-operation it needs to address changes sweeping the Middle East.

Relations between Turkey and Israel have deteriorated drastically since the UN report was made public on Thursday. Turkey has expelled Israel’s ambassador and frozen military co-operation after the report failed to prompt an apology from Israel.

“The time has come for Israel to pay a price for its illegal actions. This price, first of all, is being deprived of Turkey’s friendship,” he said.

“All officials above the level of second secretary, primarily the ambassador, will turn back to their country at the latest on Wednesday,” he added.

“Second, all the military agreements between Israel and Turkey are suspended.”

Ban is in Australia on his way to the Pacific island nations of Solomon Islands and Kiribati. He will also attend a meeting of Pacific islands leaders in New Zealand, where he will discuss the threats of climate change.