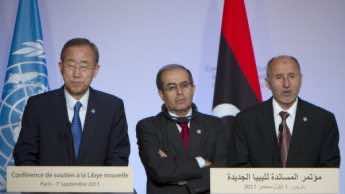 As business slowly returned to normal and police started appearing on the streets of Tripoli, a UN envoy arrived Saturday to discuss with the National Transitional Council what role the United Nations would play in Libya in the future.

Police were back on the streets of Tripoli and business slowly resumed Saturday after a week of fighting, festivities and political tumult, in a quiet but significant boost for Libya’s fledgling government.

Meanwhile the international community — hyper-sensitive to mistakes made in Iraq and Afghanistan — moved to ensure longer-term security after a nearly seven-month war that continues to rage in pockets of the vast desert nation.

“The police are now back on the streets and we are ready to serve our country again,” said 22-year-old officer Abdulkader Ammar, on patrol for the first time since Moamer Kadhafi’s fall.

Interim interior and security minister Ahmed Darrad earlier told AFP that “starting Saturday, there will be a large number of security personnel and policemen who will go back to work,” as he called on fighters from other cities to return home.

The relative normalcy across the city seen on Saturday came in the face of threats from the veteran dictator to mount a terrorist insurgency, amid petrol and water shortages and with an arsenal of weapons still in the hands of volunteer militias.

“The war is over and we have to go back to work,” Abdullah Turki, a member of the NTC’s stabilisation team told AFP. “It will take time, but it will come, people are eager to participate in rebuilding Libya.”

Ian Martin, a special envoy for UN Secretary General Ban Ki-moon arrived in Tripoli on Saturday, as Ban said the world body was ready to help.

“I am here now to discuss with the National Transitional Council how the United Nations can be most helpful in the future,” Martin told reporters on arrival.

He flew in amid questions about the UN’s future role in the country, particularly about whether a peacekeeping mission will be necessary.

Other UN agencies have already begun to descend on the capital. The organisation’s humanitarian coordinator for Libya on Friday said that water shortages in Tripoli are “serious” but not “critical” as he outlined plans to provide 11 million litres of drinking water.

Residents of the capital have been without running water for close to a week as the war forced disruptions to Libya’s state-of-the-art system that draws water from underground wells deep in the south of the country.

Despite the hardships and lingering concerns about security, many shops, banks and government offices all reopened for business, on the first day back at work since the end of Ramadan.

“I closed my store exactly one month ago because there was no transport or fuel,” said 30-year-old Mohamed Abdulah, who owns a coffee shop in Tripoli’s old town.

“I opened my shop today. I have problems with water but the security situation is good.”

Outside the capital, the NTC has extended until next weekend an ultimatum for the surrender of his remaining loyalists but moved troops towards Bani Walid, a desert town southeast of the capital where they suspect Kadhafi may have taken refuge.

Some 600 men aboard 200 combat vehicles moved to within 20 kilometres (12 miles) of Bani Walid without meeting any opposition, before returning to their base in Misrata, fighters said.

NATO meanwhile said it had struck targets of pro-Kadhafi forces Friday in the vicinity of Sirte, Bani Walid, and Hun, half-way between Sirte and the loyalist-held oasis town of Sabha in the south.

Otherwise all was quiet on the western and eastern fronts where TNC forces are awaiting the expiry of the ultimatum or the surrender of the coastal city of Sirte, Kadhafi’s home town.

NATO capitals meanwhile faced tough questions about their relationship with members of the former regime following the discovery of secret files in the Libyan capital.

British and US intelligence cooperated closely with Tripoli, with prisoners being offered to Kadhafi’s regime under the so-called rendition programme, the Wall Street Journal said.

Two leading critics of the NATO-led military campaign that helped topple Kadhafi moved to protect their interests in the new Libya.

A senior NTC member said Saturday foreign investors are welcome to return to Libya where the economy is stabilising.

“We ask foreign investors to resume their operations” in Libya, Abdullah Shammiya, interim economic minister, said in a press briefing in Tripoli.

“Their investments are still here and we respect previous contracts,” he added.

He called on citizens of the capital to open shops and factories so that they can play a positive role in the country’s political and economic transition.