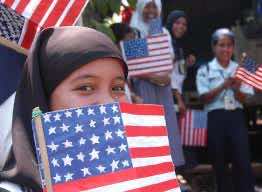 For Arab Americans, the 2012 election will be different.

Many of the same critical issues that shaped the 2008 contest are still in play, and will define the national agenda in 2012: Iraq remains unsettled; there is no Israeli-Palestinian peace; the U.S. economy is still in shambles; and intense partisanship continues to impede solutions to some of our nation’s most pressing problems. Nevertheless, this election will be different.

For one, the Arab world is different, with dramatic new developments reshaping the political map of the region. Across the Middle East, Arabs have risen up demanding change. No longer satisfied with the status quo, they are holding their governments accountable. As a result, Arab leaders have become more responsive to their public’s opinion.

This, of course, presents America with a new challenge. We, too, must now listen more closely to the aspirations of the Arab world, placing serious constraints on policy makers. Congress may continue to play “politics as usual;” pursuing a dangerously one-sided pro-Israeli agenda, but presidents won’t have that luxury. They will need to be more attentive to Arab realities.

The politics here at home are also different. At the very moment in history when America needs to better understand and be better understood in the Arab World, the Tea Party and religious fundamentalists are being incited by dangerous and well-funded anti-Arab and anti-Muslim fringe groups. We saw the damage they could do with the anti-mosque and anti-Islam hate campaign they launched during the 2008 Presidential and 2010 Congressional elections. All signs point to their continuing to find ways to exploit fear of Muslims, using it as a political wedge issue. Already we see an intensification of their efforts leading up to 2012, with anti-Muslim comments from many of the presidential candidates and an organized national campaign focused on passing legislation to ban the application of Shariah law in America.

These anti-Muslim campaigns send a message to the world of a growing intolerance in America. They also make it difficult to engage in reasoned discourse on critical issues facing our nation and the world. Additionally, such hate campaigns ultimately threaten the very social fabric of our country. But when crass politicians find an issue that mobilizes their supporters, they are all too prone to say “the country be damned.”

Finally, the general mood in the country is different, with the prolonged recession leading to long term unemployment and underemployment, home mortgages threatened and pensions at risk. All of this has shaken confidence in the American dream. This, in turn, has fueled the Tea Party movement and the hyper-partisanship that has paralyzed Washington. As a result, the hope many felt in 2008 has evaporated, and has now been replaced by cynicism or anger.

For these reasons, this 2012 election will be different. The challenges we confront are greater than ever before, as are the dangers we face should we not responsibly address these domestic and foreign policy imperatives. But for many Arab Americans, this election is shaping up to be a contest between a candidate who has disappointed them and candidates who scare the hell out of them.

Arab Americans voted overwhelmingly for Barack Obama in 2008. After eight long years of the recklessness and neglect that characterized the Bush administration’s approaches to the Middle East, civil liberties and the economy, Arab Americans voted for change. Three years later, they are still waiting for real change to occur. They see the Middle East undergoing a dramatic transformation, while politics in Washington are paralyzed and getting meaner and more out of touch with Middle East realities with each passing day.

There are a few things we know for certain: the 2012 election will take place with or without us; the challenges facing our country won’t go away by themselves, nor will they be solved by one election or by one leader, from the top down.

While it is true that the Arab World is changing, the change we need begins here at home, in our understanding of and our approach to this critical region of the world. And this we know won’t happen unless we are organized to play a role in helping to shape the national debate in 2012.

This is going to be a different election. Just how different it will be depends, in part, on how organized and engaged we are.

Dr. James J. Zogby is the author of Arab Voices: What They Are Saying to Us, and Why it Matters (Palgrave Macmillan, October 2010) and the founder and president of the Arab American Institute (AAI), a Washington, D.C.-based organization which serves as the political and policy research arm of the Arab American-community.