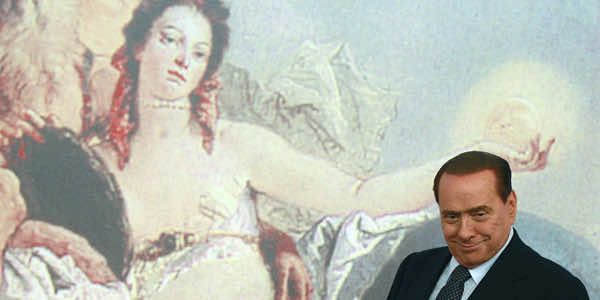 ROME, Italy — Under the guise of “female empowerment,” members of the Italian parliament are supporting a bill to ban the full veil worn by some Muslim women. But Italy has much bigger problems than its citizens’ clothing choices.

Italy is faced by a worsening debt crisis, rife corruption, and the “bunga bunga” scandals of Premier Silvio Berlusconi’s rule. The country should, perhaps, be spending energy on topics that could potentially help more than the 3,000 people in Italy that this bill would affect. Worse, there’s absolutely no evidence that banning a clothing item helps anybody at all. Except, that is, for lawmakers, who can distract Italians from the bigger problems at hand — and win plaudits for their “human rights” work.

Given Italy’s dismal reputation when it comes to sexual equality, that’s pretty bold. A survey last month found that Italian women are the unhappiest in Europe; far from the stereotype of the cheery Italian “mamma”, two-thirds of women say they regret having had children. Women are a smaller percentage of the labor force in Italy than any other EU nation but Malta, they earn 20 percent less than men, and they hold only seven percent of Italy’s positions in corporate management.

Embodying, and in some ways causing, the problems is Berlusconi who has (allegedly) been convincing women as young as 17 to partake in his parties involving stripteases and sex in return for such “gifts” as political appointments.

Perhaps coincidentally, a member of Berlusconi’s own party proposed the ban on veils. Whether or not the ban is meant to be a distraction from other problems such as gender inequality and fiscal ruin, it is definitely a mistake. As in France and Belgium, Italy’s law proposes to ban the “full veil,” one of a multitude of headcoverings along with a niqab (face-covering), or more notoriously still, the burqa. Thanks to the Taliban’s deserved notoriety, most Westerners conflate any full covering with cruelty and misogyny. But Afghan women wore the burqa, which they call the chaderi, long before the Taliban existed — as early as the 18th century. It’s no surprise, therefore, that many still wear it now that the regime is out of power.

One thing that’s often missed in the debate over “the veil” is that, for the women who wear the covering, its meanings are as many-layered as the garment itself. In one study on the chaderi‘s usage, most Afghan women who wore the covering were nonchalant. They made it seem “nearly equivalent to the Western raincoat,” reported study author M. Catherine Daly. When pressed, women told her that they wore the chaderi for its protection — both from weather and unwelcome male attention.

The chaderi has social functions, too. With its abundance of cloth and craftsmanship, it’s often seen as a sign of wealth and class — although in the late 20th century, as upper classes started dressing more like Europeans, the chaderi started to connote country bumpkin. The covering also symbolizes honor. One woman told Daly that if her husband didn’t buy her a chaderi, she’d think he didn’t appreciate her.

Patriarchal? Maybe. But, like any other expression of honor or modesty, the chaderi can also give women have a little more wiggle room in society. After 20 years of war that killed many Afghan men, more women went to work. They donned chaderi to mitigate the harm done by working to their families’ honor.

No matter why they initially put it on, once used to veiling fully, women say, leaving the house uncovered is like going out naked. When the Pahlavi regime in Iran forced women to unveil, one woman bewailed, “How could we go out with nothing on?” And yet, as one supporter of the Italian bill, lawmaker Barbara Saltamartini of Berlusconi’s People of Freedom party, said in a statement, “Final approval will put an end to the suffering of many women who are often forced to wear the burka or niqab, which annihilates their dignity and gets in the way of integration.”

What’s particularly smart about the situation in Italy is that it’s a Muslim woman — naturalized Moroccan immigrant Souad Sbai — who proposed the bill. In France, one of the extraordinary things was that the whole debate seemed to occur without Muslim women being present at all. But, as shown in her interview with Time, Sbai’s Muslim faith doesn’t exactly mean she has a grasp on the covering’s nuances. “I feel humiliated having to talk about burqas,” she said. “I never saw burqas [as a child in Morocco]. Why do I see them here?”

Veiling isn’t necessarily about religion, as Shabi has said herself. In Italy, a first- or second-generation immigrant women’s choices to veil might just have as much to do with memory, with maintaining traditions and ties to home in an often-frightening new setting, as when an immigrant family persists in eating their home cuisine or speaking their native language. And that need might be even stronger in a country not exactly known for embracing immigrant cultures, a country where one town even has passed a law to ban kebabs because, as the mayor said, “This food is certainly not part of our tradition and of our identity.” That mayor, not-so-incidentally, is a member of the anti-immigration Northern League, a party that shares power with Berlusconi’s in Italy’s ruling coalition.

So, Italy’s lawmakers, here’s a suggestion. If you really want to keep women from being “oppressed” in Italy, don’t make them dress a certain way because it makes you feel more comfortable. Empower them. Create jobs. Enforce gender-parity laws.

Oh, and don’t support the man who has, single-handedly, taught millions of Italians that women are only sexual objects.

Of course, that’s the very outlook that — interestingly — a veil is meant to challenge. Talking to a veiled woman? You can’t just gaze at her eyelashes and chest. You have to actually … talk to her.