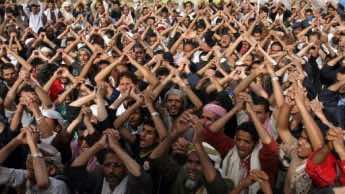 Security forces closed off all access routes to the capital from Saturday afternoon while armed civilians loyal to the veteran president also took to Sanaa’s streets, an AFP correspondent said.

But in an apparent bid to avoid a confrontation with Saleh loyalists, demonstrators marched in a part of northern Sanaa that is guarded by an armoured division led by a general who has defected to the opposition.

The marchers started off from University Square — now dubbed Change Square by protesters — sticking to nearby streets and within the area controlled by the general’s troops.

“The people want to march on the (presidential) palace,” demonstrators chanted.

Sanaa has been left without electricity since Saturday afternoon, and most petrol stations in the capital have turned off the taps, semi-paralysing the capital.

The massive deployment by troops loyal to Saleh followed an opposition call to step up protests against his rule with the political process deadlocked in the face of the president’s long absence abroad.

Demonstrations were also staged in Taez, Yemen’s second largest city and a flashpoint in anti-Saleh protests which have swept the impoverished state since late January.

Saleh has been receiving medical treatment in Saudi Arabia for wounds sustained in a June 3 bomb attack on his Sanaa palace compound.

“We have called for intensifying the challenge in order to move towards a peaceful solution,” said Huria Mashhur, spokeswoman of the opposition National Council, an umbrella group of anti-Saleh forces.

“The political process has reached an impasse because of Saleh’s refusal to sign the Gulf plan,” she said, adding that protests should be kept up “until the fall of the regime.”

The Gulf plan proposes that Saleh transfer power to his vice president within 30 days in exchange for a promise of immunity from prosecution.

“We hope that forces loyal to Saleh do not use weapons to disperse the peaceful marches of young people,” Mashhur said, adding that army units which defected to the protest movement were “on alert to defend the protesters.”

“We hope there is no challenge… to avoid an armed confrontation with dangerous consequences,” she said, urging Gulf countries, the United States and European Union “to increase pressure on the regime” to avoid a civil war.

In southern Yemen and Taez, armed tribesmen clashed with Saleh loyalists in the elite Republican Guards at dawn on Sunday, according to local residents.

In held the opposition “responsible for the consequences” of any violence and called for “serious and responsible dialogue.”