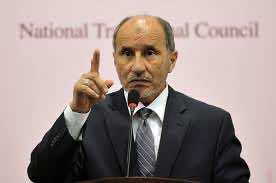 Libya’s revolutionary leaders say that negotiations over a peaceful handover in the loyalist town of Bani Walid, 150km southeast of the capital Tripoli, have collapsed and fighters have surrounded the city.

Al Jazeera’s Sue Turton, reporting from near Bani Walid on Sunday, said that negotiations have collapsed and the revolutionary fighters are hoping the people in the town will rise up against supporters of Muammar Gaddafi, the deposed Libyan leader.

“The negotiations are dead and buried,” she said.

Earlier on Sunday, speaking in the eastern city of Benghazi, Bani said that revolutionaries were in control of key strategic points around the city.

“There was fighting in Bani Walid, now I can say our revolutionaries have control of some important points around Bani Walid. And they are raising the independence flag over there,” Bani said. “Soon Bani Walid will be liberated completely.”

Al Jazeera’s Andrew Simmons, reporting from As Saddadah, southeast of Tripoi, said he had heard reports of fighting within Bani Walid.

“This could be that that there are sleeper groups in that town [of Bani Walid] who are very much supporting the revolution and have started to rise in some parts of the town,” he said.

Al Jazeera’s Turton said NTC fighters outside Bani Walid estimate the number of Gaddafi troops remaining in the town at less than 100.

“This is aside from the Gaddafi loyalists who we’ve heard have come out, who are manning checkpoints … civilians who have weapons,” she said. “But as for actual Gaddafi troops, they’re saying no more than 100.”

Khamis had died in flighting close to Tripoli and was buried near Bani Walid.

Bani Walid has been speculated to be a possible refuge for Gaddafi and other members of his family.

Abdulrazzak Naduri, an NTC military commander in nearby Tarhuna, told the Reuters news agency that one of Gaddafi son’s, Saadi, was in the town while another, Saif al-Islam, had recently fled.

Asked if Gaddafi was in the town, as claimed by NTC military commanders, Ali Tarhouni, the NTC’s oil minister said: “As for Gaddafi himself … we know where he is.”

The city, along with Sirte on the Mediterranean coast and Sabha deep in the Sahara desert, are the last pockets of Gaddafi support.

“What the NTC are hoping for Bani Walid, if they manage to get a settlement there, [is] that it will be the model for the other two [cities],” our correspondent said.

Gaddafi’s spokesperson has dismissed suggestions that Bani Walid was about to surrender and insisted that tribal leaders there were still loyal to the deposed leader.

“Bani Walid is a major city hosting one of the biggest tribes in Libya who have declared their allegiance to the leader and they refused all approaches for negotiation with the Transitional Council,” Moussa Ibrahim told Reuters in a telephone interview.

Ibrahim said Gaddafi was “in a safe place surrounded by many people who are prepared to protect him”.

A special envoy for Ban Ki-moon, the UN secretary general, arrived in Tripoli on Saturday to deliver a message that the world body was ready to assist in re-establishing security after the nearly seven-month uprising that toppled Gaddafi.

Ian Martin, the UN special adviser, told Reuters on Sunday that Libya’s election process needs to begin soon and the proliferation of weapons is a “major concern”.

“I am here now to discuss with the National Transitional Council how the United Nations can be most helpful in the future,” he said on arrival.

Martin arrived amid questions about the UN’s future role in the country, particularly about whether a peacekeeping mission will be necessary.

“I think the future leaders of Libya face a very big challenge, they have already shown the ways in which they are ready to tackle that challenge and it will be the commitment of the United Nations to assist them in any way they ask.”