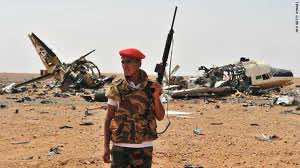 Chinese arms firms held talks with representatives of Libya’s Muammar Gaddafi’s beleaguered forces in July over weapons sales, but behind Beijing’s back, the Chinese Foreign Ministry said on Monday.

The revelation is nonetheless likely to deal a fresh blow to China’s already delicate relations with Libyan rebel forces that have ousted Gaddafi.

The ministry confirmed the gist of reports in the Globe and Mail and the New York Times that documents found in the Libyan capital, Tripoli, indicated that Chinese companies offered to sell rocket launchers, anti-tank missiles and other arms with a total of some $200 million to Gaddafi’s forces, despite a U.N. ban on such sales.

A ministry spokeswoman, Jiang Yu, said members of Gaddafi’s government had come to China and held talks with a “handful” of Chinese arms company officials without the knowledge of the government.

“We have clarified with the relevant agencies that in July the Gaddafi government sent personnel to China without the knowledge of the Chinese government and they engaged in contact with a handful of people from the companies concerned,” Jiang told a news briefing in Beijing.

“The Chinese companies did not sign arms trade contacts, nor did they export military items to Libya,” Jiang said. “I believe that the agencies in charge of the arms trade will certainly treat this seriously.”

Even if the arms talks were behind Beijing’s back, the controversy could intensify mistrust between Beijing and the rebels seeking to defeat Gaddafi’s shrinking forces and claim control of all Libya.

“We have hard evidence of deals going on between China and Gaddafi, and we have all the documents to prove it,” a rebel military spokesman, Abdulrahman Busin, told the Times.

The arms issue comes on the heels of tensions between Beijing and the Libyan rebels over frozen funds.

On the weekend, the head of Libya’s rebel National Transitional Council (NTC), Mustafa Abdel Jalil, said China had obstructed the release of some of Libya’s frozen assets.

Although China agreed with other powers last week to unfreeze $15 billion of Libyan assets abroad, it opposed handing control of more to the interim ruling council, according to Libyan rebel spokesman Shamsiddin Abdulmolah.

“In principle, we don’t have a problem” with unfreezing funds, said the Chinese spokeswoman Jiang.

“But out of a responsible attitude, we and some members of the Security Council want further explanation and information from the applicant countries about the uses of the funds and oversight of them,” she said.

Libya’s interim council has promised rewards for those who took a leading role in backing the revolt against Gaddafi, and that has raised concerns that China could be disadvantaged.

China is the world’s second-biggest oil consumer and last year obtained 3 percent of its imported crude from Libya.

China did not use its U.N. Security Council veto power in March to block a resolution that authorised the NATO bombing campaign against Gaddafi’s forces, but it condemned the expanding strikes and repeatedly urged compromise between his government and the rebels.

By the time of the visit by Gaddafi’s officials, China was already courting the Libyan rebels. But China has not joined Western powers in formally recognising the NTC as the legitimate authority in Libya, but has acknowledged its “important role” after Gaddafi’s ousting.

The reports said Libyan security officials visiting China in July were received by three arms companies, including Norinco and the China Xinxing Import and Export Corporation.

Norinco has faced sanctions from the United States, which accused it of selling missile parts to Iran, in spite of Beijing’s arms control rules.

Asked if the Chinese companies or their personnel could be punished over the talks with Gaddafi’s officials, Jiang said: “I’m sure that the agencies in charge of Chinese arms (sales) will deal with this in a serious and conscientious way.”