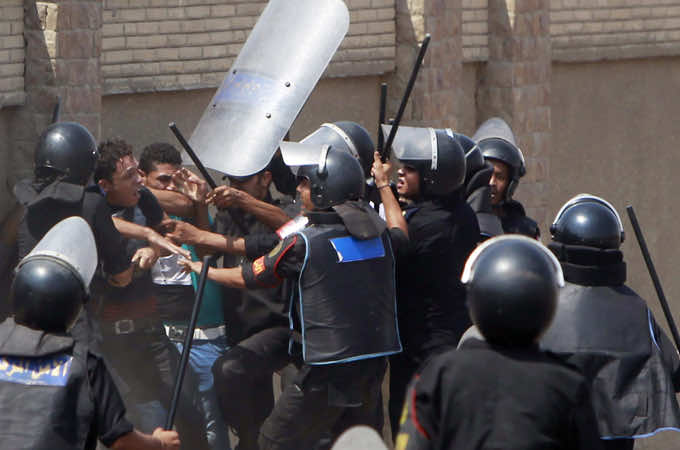 Scuffles broke out inside and outside the courtroom as the trial of Hosni Mubarak, the former Egyptian president, resumed in Cairo with police witnesses expected to reveal details about a crackdown on protesters that left hundreds dead.

Al Jazeera’s Sherine Tadros said that court proceedings were halted just 40 minutes into Monday’s session as lawyers for the prosecution and the defence had to be separated by police.

People present said a fight broke out when a Mubarak supporter lifted up a photo of the former president, angering relatives of victims of the uprising.

The scuffles prompted the judge to call a recess, briefly delaying the hearing of four senior police officers.

As the trial resumed, a senior police witness denied that police could have used automatic weapons against protesters, state television reported.

At least 12 people were arrested outside the army academy where the trial is taking place as pro- and anti-Mubarak groups clashed, and some threw stones at riot police.

Our correspondent said more police had been deployed than for the trial’s previous two sessions.

“Some of the people gathered outside the courtroom have started throwing rocks at the riot police,” Tadros said.

“This is something we saw in the last two sessions as well, when there was rock throwing between pro- and anti-Mubarak protesters. Now it seems to be concentrated at the riot police. It is indicative of the kind of emotions this trial is evoking.”

Monday’s session is expected to bring four senior police officers to the witness stand in a case that has gripped Egypt and the Arab world.

Mubarak arrived at the courthouse by helicopter, but Egyptians will not be able to follow the proceedings, previously broadcast on national television and big screens outside the courthouse, after Ahmed Refaat, the case judge, ruled that no more sessions should be televised

Egyptians were stunned by television images of the 83-year-old former president of 30 years being wheeled into the courtroom cage on a hospital bed for the first two sessions.

Mubarak’s sons, Alaa and Gamal, once viewed as being groomed for top office, Habib el-Adly, his former interior minister, and six senior police officers are also on trial.

Mubarak is the first Arab leader to stand trial in person since the beginning of a wave of popular uprisings sweeping the Middle East this year.

“We are expecting to hear the testimony of four witnesses that the prosecution has asked for to prove the charges against Mubarak and the others,” said Gamal Eid, a lawyer representing 16 of the roughly 850 people killed in the uprising.

“These are key witnesses, people within the central security force, including the head of operations and communications,” our correspondent said.

“The prosecution is trying to prove that indeed those orders to kill unarmed protesters were given.”

Mubarak is charged with involvement in the killing of the protesters.

Eid said one of the witnesses is General Hussein Saeed Mohamed Mursi, a top police officer who worked in the operations room of the police force during the uprising.

“[Mursi] had been accused in a decision issued by the general prosecutor of deleting those recordings but he later turned into a witness,” Eid said.

The three other witnesses named by the court – Emad Badr Saeed, Bassim Mohamed el-Otaify and Mahmoud Galal Abdel Hamid – are also police officers who were in the operations room during the 18 days of protests.

Ten Kuwaiti lawyers had been expected to join the defence team for Mubarak on Monday, but were not allowed into the courtroom, sources told Al Jazeera.

Some of the lawyers said their role comes as a gesture of gratitude to Mubarak for his support for a US-led coalition that expelled Iraq from Kuwait in 1991.

A press conference held by the Kuwaiti lawyers on Sunday descended into chaos when pro-Mubarak supporters attacked a journalist, scratching his arms and beating him after he asked why the Kuwaitis were defending the ousted president.