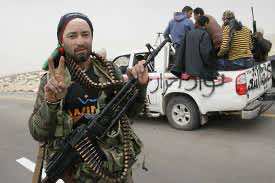 Libyan fighters are poised for assaults on two of Muammar Gaddafi’s last remaining strongholds, Bani Walid and Sirte, but renewed negotiations have raised hopes for a peaceful end to the standoff.

Fighters for the National Transitional Council (NTC) on Monday exchanged fire with Gaddafi loyalists as they advanced closer to the besieged city of Bani Walid, and were awaiting orders to launch their final attack after negotiations over its surrender collapsed a day earlier.

“Rebels have pushed to within seven kilometres of the centre of Bani Walid. They exchanged fire with some of Gaddafi’s forces,” Al Jazeera’s Sue Turton said on Monday, reporting from near the city.

“But they have since retreated a little bit instead of setting up a defensive position there,” she added. “And the reason for that is, we have more talks”.

Rebels said another group had come forward to negotiate, distancing themselves from those conducting previous talks, our correspondent said.

“The rebels yet again have said they will stall going any further, they have pulled back and they are waiting yet again to see if they can come to an agreement.”

Rebel negotiator Abdullah Kanshil said on Sunday that the earlier talks had broken down after Gaddafi loyalists insisted the fighters put down their weapons before entering Bani Walid, some 150km southeast of Tripoli.

On Sunday Turton said the fighters were hoping the people in the town would rise up against supporters of Gaddafi.

Turton reported that fighters outside Bani Walid estimated the number of Gaddafi troops remaining in the town at less than 100.

“This is aside from the Gaddafi loyalists who we’ve heard have come out, who are manning checkpoints … civilians who have weapons,” she said.

Meanwhile, in Gaddafi’s hometown of Sirte, in the east of the country, negotiations also continued for the city’s surrender.

Bani Walid and Sirte, along with Sabha deep in the Sahara desert, are the last pockets of support for Gaddafi whose whereabouts has been a mystery since he was toppled from power last month.