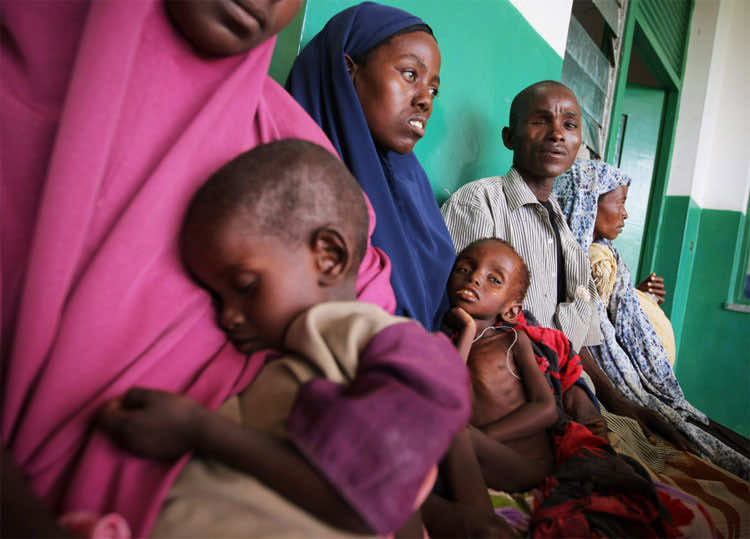 The United Nations agricultural agency today called for greater efforts bring the food crisis in the Horn of Africa under control, saying that famine conditions had spread to a sixth area in Somalia, putting an estimated 750,000 people in the country at risk of starvation over the next four months.The latest data released by the Food Security and Nutrition Analysis Unit for Somalia (FSNAU), which is managed by the UN Food and Agriculture Organization (FAO), indicated that famine has spread to the Bay region, one of Somalia’s most productive areas. Famine was earlier declared in five other areas in southern and central Somalia.

The number of Somalis in need of humanitarian assistance has increased from 2.4 million to 4 million in the past eight months, with 3 million of them in the country’s south, according to FAO.

“Though these figures paint a bleak picture for Somalia, there is a window of opportunity for the humanitarian community to stop and reverse this undesirable trend by supporting farmers and herders in addition to other emergency interventions,” Luca Alinovi, the FAO Officer in Charge of Somalia, told a news conference in the Kenyan capital, Nairobi.

Bay region produces 80 per cent of Somalia’s sorghum harvest and is considered the country’s breadbasket.

Record levels of acute malnutrition have been registered there, with 58 per cent of children under the age of five acutely malnourished, with a crude mortality rate of more than two deaths per 10,000 per day.

The five other areas hit by famine include the Bakool agropastoral communities in Lower Shabelle region, the agropastoral areas of Balad and Cadale districts of Middle Shabelle, the Afgoye corridor which has the highest concentration of internally displaced persons (IDP) settlements, and the Mogadishu IDP community.

Despite ongoing response to the humanitarian crisis, projections indicate that famine will become widespread throughout southern Somalia by the end of this year.

“In the current food security situation, famine conditions are expected to spread to agropastoral populations in Gedo, Hiran, Middle Shabelle and Juba regions, and the riverine populations of Juba and Gedo in the coming four months,” said Grainne Moloney, the FSNAU Chief Technical Adviser.

A post-harvest assessment showed this year’s cereal crop was the lowest in 17 years. Dwindling stocks of local cereals have sent cereal prices soaring by 300 percent over the past year, and nearly half a million acutely malnourished children across Somalia require urgent nutritional treatment.

FAO has appealed for $70 million to fund agricultural emergency assistance for one million farmers and herders in Somalia. With increasing access to many parts of southern Somalia, the agency is currently carrying out emergency interventions and will open two new offices in Mogadishu and Dolo and several sub-offices in each region.

“We have already embarked on mass production of improved seeds and procured 5,000 tons of fertilizer, among other farm inputs, in preparation for the next planting season from October to December,” said Mr. Alinovi.

A state of famine is declared using a tool known as Integrated Food Security Phase Classification (IPC). FSNAU and the Famine Early Warning Systems Network (FEWS NET) adhere to the IPC standards when declaring a famine on the basis of at least three criteria – severe lack access to food for 20 percent of a population acute malnutrition exceeding 30 percent and a crude death rate that exceeds two deaths per 10,000 people per day.

The current drought-related food crisis has affected other countries in the Horn of Africa, including northern Kenya, southern Ethiopia and Djibouti – where large areas are classified as being in a state of humanitarian emergency.