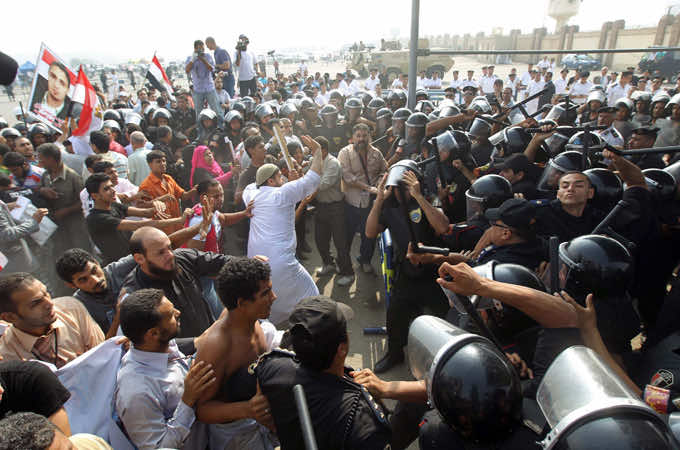 A senior police witness in the trial of Hosni Mubarak, the former Egyptian president, has insisted he was not aware of any orders to use automatic weapons against protesters.

General Hussein Saeed Mursi, in his testimony on Monday, said that police had been given clear instructions, however, to use live ammunition to protect the interior ministry from attack during the uprising which eventually overthrew Mubarak.

He said the order was given by Ahmed Ramzi, a senior officer who is one of the defendants in the trial.

Mursi said he had heard police generals on January 28, the fourth day of the uprising, saying that automatic weapons had been used.

Police officials also discussed the use of ambulances to carry “weapons and ammunition because police vehicles were being attacked” by protesters, the police official said.

Mursi, head of communication in the state security service, was in the police operations room during the uprising.

He was one of four police witnesses to be heard about the crackdown on protesters that left hundreds of people dead.

“In my 30 years of experience with state security, I have not heard of any incident where an order was given to use live ammunition against protesters,” he told the court.

The court is trying to determine who gave the orders for the shooting of protesters during the 18-day revolution which ended Mubarak’s 30 years in power.

Prosecutors claim that Mubarak and Habib el-Adly, his former interior minister, ordered allowing use of lethal force against peaceful protesters.

Before Monday’s session, prosecutors said Mursi would pin orders to open fire on protesters with live ammunition directly to el-Adly – and by implication to Mubarak.

But when the judge asked Mursi on the stand if he knew whether el-Adly issued such orders, he replied, “No, I don’t know,” according to Mohammed Damaty, a lawyer representing the victims’ families, and human
rights activist Gamal Eid, who tweeted from the courtroom.

One of the prosecution lawyers, Mustafa Khater, confronted Mursi on the stand, saying that in early questioning by prosecutors he testified that el-Adly himself gave the order to use live ammunition and that it had been used against protesters in front of the ruling party headquarters.

“I have no answer,” Mursi replied simply to Khater.

Two other police officers who testified later in the session echoed a similar line as Mursi. They said there were no orders to kill the protesters, instead, “the orders were to open fire in the air or at their legs”, according to Eid’s tweets.

The court said the next hearing would be held on Wednesday.

Scuffles broke out inside and outside the courtroom in Cairo as the trial and court proceedings were temporarily halted as lawyers for the prosecution and the defence had to be separated by police.

Witnesses said a fight broke out when a defence lawyer raised a picture of Mubarak, prompting the wrath of
representatives of the victims.

One lawyer beat another with his shoes until the judge called a brief adjournment to calm things down.

Outside, at least 22 people were arrested as pro- and anti-Mubarak groups clashed, and some threw stones at riot police.

At least 26 people were injured – 14 officers from the central security forces and 12 protesters.

“We have not abandoned you,” pro-Mubarak protesters chanted, while their rivals, including family members of victims of the deadly uprising, shouted, “Punishment, punishment, they killed our children with bullets.”

The 83-year-old Mubarak, hospitalised since April, arrived at the courthouse by helicopter and was wheeled on a gurney into a metal defendants’ cage in the court.

Egyptians were not be able to follow the proceedings, previously broadcast on national television and big screens outside the courthouse, after a ruling that no more sessions should be televised.

An Egyptian legal expert, Nasser Amin, said he believed it was very likely Mubarak and el-Adly would get light sentences because Egyptian law justifies killings as self defense if carried out “in defense of state institutions.”

But Damaty said the prosecution will argue lethal force was not necessary to defend institutions. “We had protesters killed with shots in the head and chest,” he said. “This is the evidence that this was intentional.”