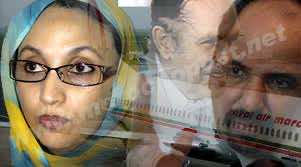 Over the past two weeks, the dominating news that captured the attention of the world’s media outlets has been the fall of the Gaddafi regime. In the midst of an avalanche of stories describing the demise of the deposed “King of the Kings of Africa”, a number of international media outlets, whether in the U.S, France and the U.K, ran news reports pointing to Polisario involvement in quashing the Libyan uprisings with the help of Algeria.

Moreover, when it comes to the Polisario claims to the Sahara, Spanish media have, more often than not, been creative in inventing stories with the ultimate goal of convincing world public opinion that the Polisario and the Saharawis continue to be victims of the “authoritarian and pitiless practices” of the Moroccan government. Take for example, the case of the events that took place in Layoune, on November 8, 2010. That day, the Moroccan authorities moved to dismantle an illegal camp of about 12,000 people (20,000 according to the Polisario and Spanish Media) who had been protesting the deterioration of their living conditions and the lack of housing.

Spanish media not only politicized this, even presenting it as protest by the population of Layoune against Moroccan rule in the Sahara. They went as far as manipulating the event and fallaciously reporting about it. Bent on sullying the international reputation of Morocco and denouncing the “barbaric way” in which the Moroccan government deals with the Saharawis, the daily newspapers El Pais and ABC, as well as the Spanish news wire Agency EFE and channel Antena 3 circulated a picture of two children wounded during an Israeli attack on Gaza in June 2006, presenting them as victims of the dismantling of the camp and the supposedly iron-fisted behavior of the Moroccan police.

To add insult to injury, they showed the picture of a family of four who were murdered In January 2010 in Casablanca, claiming, once again, that they were among the victims of the Moroccans in Layoune.

It comes as no surprise to anyone who is familiar with Spanish media to see it overlook the supposed implication of the Polisario mercenaries in helping Gaddafi cling to its power.

For many reasons, Spanish media, barring rare exceptions, have always been reluctant to echo any news reports that may tarnish the Polisario’s image as a progressive and democracy-prone movement that is leading a long-standing fight for its self-determination.

In fact, this is not the first time that the Spanish media has failed to report even-handedly about the Polisario and accurately inform their audience. Over the past decade, there have been a number of reports and studies pointing to the misappropriation by the Polisario leadership of humanitarian assistance intended for the population living in Tindouf, while denouncing the lavish lifestyle of its officials.

In early 2005, the European Anti-Fraud Office (OLAF) issued a report that incriminated the Polisario for its practices regarding the humanitarian aid it receives from the European Union and other international and non-governmental organizations.

Among its findings, the report pointed out that “the Sahwari population is the first victim of these practices of embezzlement of international aid which has generally been condemned by various international organizations, beginning with the UNHCR but also by the World Food Programme and by an American NGO, the US Committee for Refugees and Immigrants (USCRI)”. It also stressed that humanitarian aid sent to the population living in the Tindouf camps is not based on any verifiable data, adding that, since the breakout of the conflict in 1975, the Polisario has been overestimating the number of people living there in order to obtain larger amounts of humanitarian assistance.

In the same connection, the report points out that the Algerian Red Crescent and the Polisario are the first beneficiaries of this humanitarian assistance and detailed how the leaders of the Polisario use this financial manna either to buy arms or luxury real estate in the Canary Islands and mainland Spain.

In March 2008, the non-governmental organization, Interfaith International stated before the UN Human Rights Council that the “Polisario is misappropriating and reselling humanitarian aid and is spending enormous sums of money for military parades.”

In February 2010, Mesaud Ramdane, president of the Sahwari Association for the Defence of Human Rights (Asadeh) denounced the “systematic embezzlement by the Polisario of humanitarian aid intended for the population in the camps of Tindouf.” He went on to say that “it is not in the interests of the Polisario, which takes its orders from Algeria, to go ahead with a census of the Sahrawi population in the Tindouf camps [because] the Polisario is inflating the number of persons living there in order to receive substantial humanitarian assistance.”

Another example of the undemocratic ways of the Polisario and its determination to stifle dissenting voices is the case of Mustapha Salma Ould Sidi Mouloud. In April 2010, Mustapha Ould Sidi Mouloud visited the southern city of  Smara for the first time in 30 years, and declared that the Autonomy Plan presented by Morocco in 2007 as “the ideal solution” to the conflict. On his way to the Tindouf camps, on September 21, he was kidnapped by Polisario militia and imprisoned in the desert for 71 days. He now seeks to return to the camps to join his family but is being denied access.

All these disreputable practices of the Polisario- widely documented in many works and reports- find no space in Spanish major media outlets. In fact, Spanish media executives are aware of the widespread support enjoyed by the Polisario among the overwhelming majority of their country’s public opinion. This support is evidenced by the more than 200 associations that lend support to the Sahrawi population in Tindouf and the thousands of Spanish families that host every summer about 10,000 Saharawi children. Therefore, any negative reporting about the Polisario would not be well received by Spaniards. Additionally, Spanish media reflects the prevailing mood in Spain.  Spanish society seems not to have digested the fact that Morocco regained control of the Sahara at a critical moment in recent Spanish history, when Franco was dying. For many Spaniards, the late King Hassan II was not only opportunistic when he forced Spain into withdrawing from the Saharan territory; he also undermined unspoken Spanish plans to create a satellite state south of Morocco and deprive the latter of its African strategic depth.

This is the reason why Spanish media jump on any opportunity to remind Spanish officials of their “moral debt” to the Saharawis and their duty to put pressure on Morocco.

This deafening silence of Spanish media about the implications of Polisario mercenaries supporting Gaddafi and the embezzlement of humanitarian assistance stands in stark contrast with the slanderous way in which it reported about the case of Aminatou Haidar.

In mid-November 2009, the latter was sent back to Las Palmas in the Canaries after she refused to use her Moroccan-issued passport at Layoune airport, stating that she was not Moroccan and Morocco was “occupying” the Sahara. Immediately after, Spanish media outlets rushed to denounce this “disrespect of human rights” by Morocco in the Sahara and the “illegality of its presence in this territory”. They called on the Spanish government and the international community to pressure Rabat, prompt it to accept the unconditional return of Aminatou Haidar to Morocco and to abide by international law with regard to the Sahara conflict.

On the other hand, when reporting about the Polisario, this implies also reporting about Algeria, especially if the reporting has a negative overtone, as is the case with the misappropriation of humanitarian assistance. As Algeria is Spain’s main supplier of oil and gas, Spanish media know that any negative reporting about the Polisario and its mafia-like practices may anger the Algerian government and spark a crisis between Spain and Algeria. According to Claude Moniquet, President of the European Strategic Intelligence and Security Center, the main reason why the 20-page report of the OLAF- which details the numerous violations by the Polisario of international law and European rules- has not been made public is that “the highest European authorities are aware of the disastrous consequences which the publication of the report would have for relations between Algeria and Europe, whereas Algeria is one of the main suppliers of natural gas and oil to the European Union.”

If the EU, as a block of 27 countries, fears the reaction of Algeria over the publication of an incriminating report about the embezzlement of humanitarian assistance with the Algerian government’s blessing, one can easily understand that, even in the remote possibility that Spanish media wanted to tell the whole truth about the Polisario, it would refrain from doing so just to avoid a breakdown of diplomatic relations between Algeria and Spain.

In fact, the mainstay of Spanish media reporting about the Sahara issue is less to defend the Saharawi people than to settle a historic score with Morocco. If its goal were to defend the population in the Tindouf camps, it would have given voice to the defenseless population of these camps and denounced the embezzlement of the humanitarian assistance that the Polisario leaders misuse in order to enrich themselves and lead a lavish lifestyle. And if Spanish media had any credibility in defending people’s right for self-determination, it would have rushed to raise a debate about the supposed support given by the Polisario to Gaddafi and question the blind support afforded by Spanish society to this separatist movement.