GENEVA, September 6, 2011 (Reuters)More than 1,200 African migrants trapped in a southern Libyan desert town held by forces loyal to fallen leader Muammar Gaddafi fear for their lives and must be evacuated as quickly as possible, an aid agency said on Tuesday. 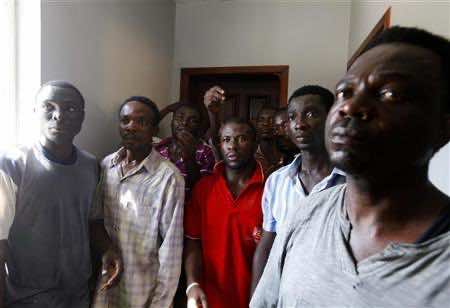 GENEVA, September 6, 2011 (Reuters)
More than 1,200 African migrants trapped in a southern Libyan desert town held by forces loyal to fallen leader Muammar Gaddafi fear for their lives and must be evacuated as quickly as possible, an aid agency said on Tuesday.

The International Organization for Migation (IOM) called on all sides to protect the migrants, mainly from Chad but also Niger and Nigeria, until they can be safely evacuated from its transit centre in Sabha. The group includes women and children.

“The migrants are terrified at the idea of being caught in the crossfire,” IOM spokesman Jean-Philippe Chauzy told a news briefing, alluding to the possibility of forces from Libya’s new transitional authority storming Sabha if negotiations fail.

Sub-Saharan migrants have lived and worked in Libya for decades. Many have suffered increasing abuse during the conflict, sometimes accused of being mercenaries fighting alongside pro-Gaddafi forces against rebels who toppled him two weeks ago, according to the Geneva-based IOM.

“Sub-Saharan Africans have been subject to discrimination, physical and verbal violence and stigma which unfortunately worsened during the last days and weeks of the Gaddafi regime. Allegations that mercenaries from countries like Chad or Niger were fighting alongside Gaddafi forces only exacerbated rancour against nationals from these countries,” Chauzy said.

Asked about reports migrants may have been lynched, he said: “They talk more of constant harassment and fear of crossing checkpoints manned by young men who are armed. We haven’t received direct information related to killings, massacres or lynchings, it is more a pattern of systematic threats.”

The United Nations human rights office said it had no evidence of killings of migrants in Libya but had received consistent reports of them being subject to arbitrary detention and harassment.

In a statement issued after Chauzy’s briefing, the IOM said “there is no longer any political infrastructure in Sabha” able to support the migrants until evacuation plans are organised.

“With no electricity, fuel and little food and water, the situation for the migrants and those in the town is becoming increasingly difficult,” it said, adding that a high-level IOM delegation heading shortly to Tripoli and Benghazi.

The IOM evacuated nearly 1,400 vulnerable Chadian and other migrants by air in July from Sabha, many of whom had fled from areas around Tripoli, Misrata and Benghazi.

“However, with the likelihood of an all-out assault on Sebha, this route may not be feasible,” the statement said.

Scores of Libyan army vehicles have crossed the southern desert frontier into Niger in what may be a secretly negotiated bid by Gaddafi for refuge in a friendly African state, military sources from France and Niger told Reuters.