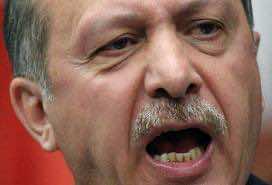 Turkish Prime Minister Tayyip Erdogan said Tuesday that Turkey would suspend commercial defence industry ties with Israel, the most recent in a series of sanctions following a row with Israel over a 2010 raid on an aid ship bound for Gaza.

Only hours after Israel said the continued presence of its defence attache at the embassy in Ankara indicated there was no definitive break with Turkey, Erdogan declared a suspension to all military and commercial relations.

And despite pleas from top diplomats at the weekend to end their row over last year’s attack on a Gaza-bound aid flotilla, Erdogan risked causing further offence by berating Israel for behaving like “a spoiled child”.

Last week, Turkey announced that the Israeli ambassador Gaby Levy was being expelled and all bilateral military agreements were suspended as it angrily rejected the findings of a United Nations probe into the deadly flotilla raid.

Now in his first official reaction since that announcement, Erdogan went even further.

Once Israel’s closest friend in the Muslim world, Turkey has been increasingly critical of the Jewish state since Erdogan and his Islamist-rooted Justice and Development Party (AKP) came to power in 2002.

There was widespread outrage in May last year when eight Turkish nationals and an American of Turkish descent died on the Mavi Marmara, the lead ship of the six-vessel convoy taking aid to the Palestinian territory of Gaza, in a raid by Israeli special forces in international waters.

A new UN report has criticised the “excessive” force in the raid but also angered the Palestinians by upholding Israel’s right to impose a naval blockade on Gaza to prevent arms reaching the Islamist movement Hamas.

Unlike other European countries which regard Hamas as a terrorist group, Turkey has refused to blacklist the Islamists who are the rulers of Gaza and Erdogan said he may pay a visit to Gaza, entering via neighbouring Egypt.

“We are talking with the Egyptians on this matter … A trip to Gaza is not finalized yet,” Erdogan, who is due to visit Egypt next week, told reporters.

Such a visit would be bound to infuriate Israel but Erdogan seemed in no mood for diplomacy.

“Israel has always played the role of a spoiled child,” he said in reference to Israel’s attitude towards the Palestinians.

Earlier in the day, a senior Israeli defence official had sounded a warning to Turkey while saying that the military attache would remain in place in the Ankara mission.

“There’s no break with Turkey: the proof is that our military attache in Ankara will remain in his office and that consular services there will continue to function,” Amos Gilad told Israeli public radio.

“A solution to this crisis must be found,” he added, saying Israel should seek to resolve it through its European and US connections, as well as through NATO.

“Turkey has a lot to lose with an extremist policy.”

There has been widespread disquiet at the fallout between the two countries with the UN Secretary General Ban Ki-moon among those expressing fears that it could impact on the wider Middle East peace process.

Turkey was the first Muslim-majority country to formally recognise the state of Israel in 1949 and the two countries had held regular joint military exercises.

Turkey has also long been a favourite tourist destination for Israelis who are barred from visiting many other countries in the region.

The spat has already impacted on tourism with Turkish travellers complaining that they were singled out for strip searches while flying out of Tel Aviv over the weekend.

The Israeli foreign ministry also said that 40 of its nationals were held for an hour and a half for questioning at Ataturk International Airport on Monday before they were released.