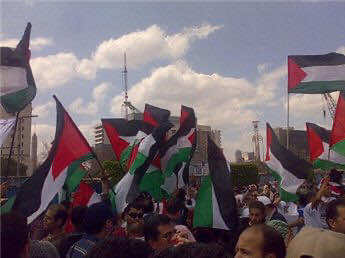 BELGRADE  – Egypt lobbied the more than 100 members of the Non-Aligned Movement on Tuesday to support Palestinian statehood at the United Nations this month, and said it believed a majority would do so after a two-day meeting of the group in Serbia.

The Palestinians say they will push for recognition in some form when the U.N. General Assembly meets in New York, in a bid to strengthen their position before any resumption of frozen peace talks with Israel.

The United States is almost certain to use its Security Council veto against full U.N. membership, but the Palestinians could table a General Assembly resolution that would upgrade their status from “observer entity” to that of a “non-member state.”

That would require 129 votes.

A two-day meeting of the Non-Aligned Movement in Belgrade, marking the 50th anniversary of its inception during the Cold War, ended without adoption of an official declaration.

But the Egyptian chair, Foreign Minister Mohammed Amr, said in concluding remarks that its members would “continue to support the Palestinian endeavours during the 66th session of the United Nations General Assembly for the recognition of the State of Palestine based on the borders of the 4th of June 1967 with East Jerusalem as its capital and to seek its admission as a full member in the United Nations.”

Organisers said the remarks were on behalf of some 101 full members and observer states present. Amr later told a news conference: “There will be no official resolution coming from this meeting, but there’s a feeling that the majority of non-aligned countries will support the U.N. resolution.”

Organisers of the Belgrade meeting said membership of the movement was now 120, mainly Asian, African and Latin American states.

The Palestinians want recognition of independence in the West Bank, East Jerusalem and the Gaza Strip.

Israel, which captured that land in 1967, sees the initiative at the United Nations as an attempt to undermine its own legitimacy.

Diplomats at the United Nations say it remains unclear how the Palestinians will proceed — with an application for full U.N. membership, upgraded status, or both.