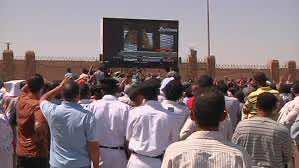 An Egyptian court trying ousted President Hosni Mubarak over the killing of protesters convened on Wednesday to hear more testimonies after police witnesses suggested this week that neither he nor his interior minister gave orders to shoot.

Mubarak, who has been in hospital since April and attended all the court sessions on a stretcher, arrived by helicopter, state TV said. Cameras have been barred inside the court.

Egyptians who helped eject the 83-year-old Mubarak after 30 years in power have regularly gathered at the court on the outskirts of Cairo demanding swift justice for about 850 people killed in the uprising.

Opponents of Mubarak and lawyers of the families of victims voiced frustration with the witnesses at Monday’s session.

“My friend dropped dead in Tahrir Square right next to me. He was shot in the head by the police,” said Rabia al-Sheikh outside the court. “Why don’t they let us inside to testify. Why are they calling on police to testify and not the people?”

Mubarak, the first Arab head of state to be tried in person since unrest erupted across the Middle East this year, is charged with conspiring to kill protesters and “inciting” some officers to use live ammunition.

Lawyers said the court could hear three more witnesses on Wednesday, depending on the time each took. Wednesday’s hearing is the fourth since the trial opened on Aug. 3.

One lawyer representing families of the victims requested the court hear the testimony of Field Marshal Mohamed Hussein Tantawi, who heads the ruling military council and was Mubarak’s defence miniser for 20 years.

About 20 protesters shouted abuse at Mubarak and police, some chanting “Hosni Mubarak is a thief”. Many Egyptians say police used tear gas, rubber bullets and live ammunition to try to quash the uprising.

There was a heavy police presence outside the court to prevent scuffles with Mubarak’s supporters.

“They have changed the testimonies they previously gave to the prosecution which makes them unreliable,” said one lawyer, Amir Salem.

A top police officer told the court on Monday he was not aware of any order to fire on protesters although he said police were given live ammunition to protect the Interior Ministry.

General Hussein Saeed Mohamed Moussa, in charge of communications for state security, said he believed the decision to issue arms was taken by a senior police officer, Ahmed Ramzi, who is on trial alongside Mubarak and former Interior Minister Habib al-Adli.

Two other police witnesses said they were told to exercise “self restraint” during the uprising.

The Kuwaiti lawyers have said their decision to volunteer for Mubarak’s defence was in recognition for his role in supporting a U.S-led coalition that drove Iraqi forces out of the Gulf Arab state in 1991