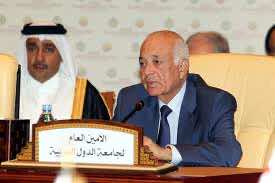 Syria requested the 11th-hour postponement of a planned visit by the Arab League chief to press for an end to its bloody crackdown on dissent as security forces killed four more people on Tuesday.

Syria said that circumstances had forced it to postpone Wednesday’s visit by Nabil al-Arabi in which he had been due to present an Arab League reform initiative of which Damascus has been strongly critical.

“Syria has asked Arab League secretary general Nabil al-Arabi to delay his visit to Damascus due to circumstances beyond our control,” the official SANA news agency said late on Tuesday.

“He has been informed of those circumstances and a new date will be set for his visit,” the news agency added.

Arabi had been commissioned by the 22-member bloc to travel to Damascus on Wednesday with a 13-point document outlining proposals to end the government’s bloody crackdown on dissent and push Syria to launch reforms.

According to a copy of the document seen by AFP, Arabi will propose that President Bashar al-Assad hold elections in three years, move towards a pluralistic government and halt immediately the crackdown on anti-government protesters.

The initiative, agreed at an Arab foreign ministers’ meeting in Cairo last month, calls for a “clear declaration of principles by President Bashar al-Assad specifying commitment to reforms he made in past speeches.”

The initiative angered Syria which said it contained “unacceptable and biased language.”

Assad has pledged reforms and in August issued a decree allowing opposition political parties alongside the ruling Baath party in power since 1963 with the constitutional status of “the leader of state and society.”

But his regime insists its policies will not be dictated from abroad.

Arabi said Tuesday that he had been instructed by the Arab League “to carry a clear message to the Syrian authorities about the situation in Syria and the need to stop the violence and launch immediate reforms.”

Arab foreign ministers held a special meeting on Syria on August 27 and called on Damascus “to follow the way of reason before it is too late” and to respect “the right of the Syrian people to live in security.”

Their proposal calls on Syria “to immediately end” the crackdown, launch “serious political contacts” with members of the opposition and to “separate the military from political and civil life.”

The Syrian Observatory for Human Rights said that in the latest bloodshed four civilians, including a 15-year-old boy, were killed by gunfire in the flashpoint central province of Homs, where another five bodies were found on Tuesday.

Security forces killed 12 people in the province on Monday, among 13 people killed nationwide.

Norwegian Foreign Minister Jonas Gahr Stoere announced on Tuesday that Oslo would match the sanctions adopted by the European Union against Damascus over its failure to halt the repression.

The EU on Friday adopted a ban on oil imports from Syria, which is expected to hit the government hard as the EU buys 95 percent of Syria’s crude exports, providing a third of its hard currency earnings. The bloc has not excluded further sanctions.

The US ambassador to Damascus Robert Ford, who has earned Damascus’s wrath by making a widely reported visit to the flashpoint city of Hama, denounced Assad’s regime.

Ford said in a strongly worded post on Facebook that although Syrian security forces had died during protests, their numbers were “far lower than the number of unarmed civilians killed.

“Neither the Syrian protest movement nor the international community will believe that this Syrian leadership desires or is capable of the deep, genuine and credible reforms that the Syrian people are demanding,” he wrote.