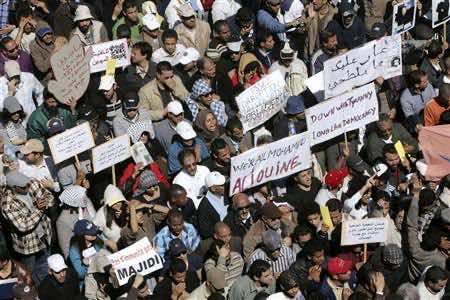 RABAT  – Hefty handouts have helped Morocco contain street protests, but now it faces a tough balancing act of rationalising spending while boosting economic growth to avoid expanding the ranks of the disenchanted.

A government spending spree on wage hikes for state employees and food and energy subsidies has siphoned off over half of public investment funds in 2011. Such funds have been key to stimulating economic growth in the country, a net oil importer, over recent years.

Now, opposition to the sale of state assets, a sharp drop in foreign currency reserves due to a surging trade deficit and the instability of local and international debt markets mean Morocco may be forced to seek assistance from foreign donors to finance its 2012 budget, said an official at an international financial institution, who declined to be named because of the sensitivity of the issue.

Morocco, which is already the biggest recipient of European Union financial aid outside Europe, raised about 1 billion euros from a eurobond issue in 2010, but jittery global markets could make another debt issue more difficult next year.

The country’s financing needs could be inflated further if economic conditions continue to worsen in the EU, which is Morocco’s main export market and a key source of some $13 billion generated annually by tourism and migrant workers’ transfers.

Morocco raised food and fuel subsidies in 2011 to 48 billion dirhams from a budgeted 17 billion, and in May increased the annual burden of public sector wages by 11 percent to 95 billion dirhams with salary hikes.

This followed street protests, inspired by the revolts in Tunisia and Egypt, which aimed to press King Mohammed, one of the biggest stakeholders in the Moroccan economy, to change the Arab world’s longest-ruling dynasty into a British- or Spanish-style monarchy.

The 48-year old king offered to hand some powers to elected officials while retaining a key say in strategic areas. Protests have continued, however, and the palace hopes early parliamentary polls in November will satisfy critics.

The handouts will raise the government’s budget deficit this year to between 5.5 and 6 percent of gross domestic product, which is estimated at $105 billion, the International Monetary Fund estimated in August. That would far exceed the 3.5 percent originally projected by the government.

For the IMF, “the major challenge for Morocco remains achieving a GDP growth rate that will help reduce unemployment and improve living standards, while ensuring medium-term macroeconomic stability”.

With almost a third of youths unemployed, high poverty rates, a poor education system and problems with nepotism and corruption, Morocco seems in the eyes of some analysts to contain all the ingredients for a revolt.

Through public investment, mostly in infrastructure, the state has mitigated popular discontent in recent years by creating thousands of jobs. But private firms, especially manufacturers, have struggled, especially after Morocco signed free-trade agreements with dozens of countries such as Turkey, Egypt, the United States and the EU over the past 15 years.

The economy, where a rain-dependent agricultural sector accounts for 15 percent of GDP but employs 40 percent of workers, has over the past few years been growing at an average rate of 5 percent, below a minimum 7 percent which analysts believe is needed to keep unemployment stable.

“The government will need some external support for the 2012 budget. It will most likely come from the French Development Agency, France or other Western countries,” said the official at the international financial institution.

Morocco may obtain funds from a multi-billion dollar initiative to help countries affected by the Arab Spring that was announced by the Group of Eight nations in Deauville, France last May.

But the Moroccan government could also help itself and generate “a lot of money” by enforcing more transparency in its public procurement, the official said, for example by “eliminating discretion in awarding licences for transport or high-sea fishing”.

The government in August forecast the economy would grow at least 4.7 percent in 2012 after a projected 5 percent in 2011 and 4.5 percent in 2010. It did not give forecasts for the budget deficit or public investment in 2012, but predicted food and energy subsidies would fall 17 percent to 40 billion dirhams next year.

The sale of state assets has been meeting growing opposition from political parties, depriving public investment of what has been a key source of funding.

“The state grants 24 billion dirhams of tax breaks annually without ever being sure of their benefit…Agriculture enjoys a tax amnesty, yet only 10 percent of its employees have social insurance,” he said.

Liz Martins, Middle East economist at HSBC, said Morocco’s budget deficit for 2011 was the highest relative to the economy since at least 2000.

She said Morocco would probably be able to avoid damage to its credit rating in the short to medium term, particularly if economic growth remained solid. But she added, “There are difficulties in the key export and tourism markets in Europe, high prices of oil and other commodities are not helping, and there is the threat of a global economic slowdown.”

The higher state sector wages will raise inflation in 2012 and boost demand, including demand for imported goods which could widen the trade deficit, said an official at Morocco’s planning authority.

“If tourism and remittances decline, this will hurt the accumulation of foreign reserves, therefore affecting the financing conditions of the economy,” the official added.