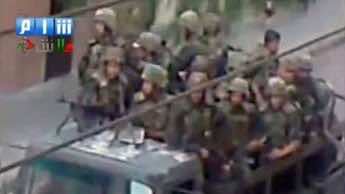 France’s Foreign Minister accused the Syrian regime Wednesday of committing “crimes against humanity” in its crackdown on protestors, on the same day as Syrian security forces killed at least 20 people in the flashpoint city of Homs.

France accused Syria of “crimes against humanity” on Wednesday, as activists said regime forces killed at least 20 people, including 17 in a tank-backed raid on the flashpoint city of Homs.

“The way it (the Syrian regime) suppressed the popular protests is unacceptable,” he said, expressing hope that Russia would change its stance and back UN condemnation of the crackdown.

The Syrian authorities, he said, should be sent “a powerful signal that such actions cannot continue.”

But Lavrov gave no signs of being ready to ease a Russian position that last week saw Moscow lash the European Union for imposing a crippling oil embargo on Syria.

“We are convinced that the essential thing is to start dialogue at the talks table,” Lavrov said.

“We consider that inciting certain forces within the opposition to boycott the invitation to dialogue is a dangerous path and risks a repetition of the Libyan scenario, which neither Russia nor France wants.”

Russia has staunchly opposed attempts by Western governments to push through a UN Security Council resolution targeting President Bashar al-Assad and has circulated an alternative draft calling for him to implement reforms.

European Union nations are considering fresh sanctions against Syria, a diplomatic source who asked not to be identified said in Brussels.

“There is preliminary political agreement” between EU nations on slapping a ban on oil-sector related investment as part of a seventh round of sanctions against the Assad regime, the source said.

Meanwhile, the US ambassador to Damascus, Robert Ford, said in a posting on Facebook that Assad’s regime “bears the responsibility for the violence.”

The United Nations says 2,200 people have been killed since democracy protests flared in Syria in mid-March.

The Local Coordination Committees, which organises the anti-regime protests on the ground, said they included 17 in the central city of Homs, one in Hama to the north and two in Sarmeen, Idlib province.

The forces used “gunfire and stun grenades to terrorise the people near the police headquarters around the citadel at the downtown,” the LLC said in a statement sent to AFP in Nicosia.

The activists said forces backed by tanks swept early morning into Homs, where communications and Internet services were cut in many neighbourhoods.

The Britain-based Syrian Observatory for Human Rights said “military reinforcements including 20 truckloads of soldiers entered the city,” and that there was “intense gunfire in the market and governorate headquarters.”

Heavy machinegun fire was heard in the Bab Dreib and Bostan Diwan neighbourhoods of Homs after 2,000 protesters took to the streets following the deaths of four people near the city on Tuesday.

The activists said demonstrations also took place in other parts of Syria including Hama, but that a massive clampdown prevented rallies in Latakia on the Mediterranean coast.

The deadly crackdown came only hours after Syria said it was postponing a planned visit to Damascus by the head of the Arab League.

“It was decided that the Arab League secretary general will visit Syria on Saturday during a telephone conversation between (Arabi), Syrian Foreign Minister Walid Muallem and Syria’s envoy at the League,” the group’s deputy leader, Ahmed Ben Helli, told reporters in Cairo.

Damascus had postponed the trip at the 11th-hour “due to circumstances beyond our control.”

Arabi has been commissioned by the 22-member bloc to travel to Damascus with a 13-point document outlining proposals to end the bloody crackdown on dissent and push Syria to launch reforms.

According to a copy of the document seen by AFP, Arabi is to propose that Assad hold elections in three years, move towards a pluralistic government and immediately halt the crackdown.

In his Facebook posting, Ford took aim at the justifications Assad’s regime uses for the violent crackdown.

Ford said he accepted security forces had died during the protests, but stressed this was “far, far lower than the number of unarmed civilians killed.”

He said Syria’s government, with “a clear preponderance of arms and force, bears the responsibility for the violence.”

Syria’s regime, which has promised to launch a wide range of reforms to appease protesters, blames the unrest on foreign-backed “armed terrorist gangs.”