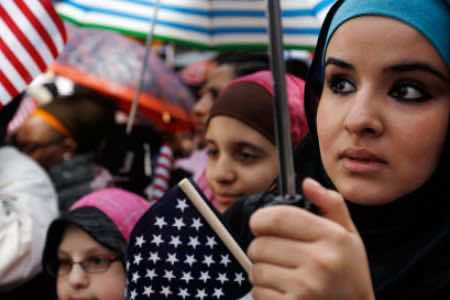 For the approaching ten-year anniversary of 9/11, the Pew Research Center for the People and the Press released last week its report Ten Years after 9/11: United in Remembrance, Divided Over Policies. The report’s findings, based on a survey of 1,509 Americans, revealed that while 9/11 has left a long-lasting impression, it has divided the country in its perception on the United States’ response to the attacks.

“Ten years after the terrorist attacks of Sept. 11, 2001, the events of that day retain a powerful hold on the public’s collective consciousness… Yet the public continues to be divided over many of the anti-terrorism policies that arose in the wake of Sept. 11,” wrote the authors of the report.

Among the findings, almost all Americans remember where they were or what they were doing when they learned of the terrorist attacks (97% in the survey). The survey of American adults included respondents 18 and older, which meant that some were as young as eight years old on 9/11. Only two other events in recent American history, according to the report, have had a similar effect on American recollection: the assassination of President John F. Kennedy in 1963, and the attack of Pearl Harbor. By comparison, a more recent event such as the killing of Osama Bin Laden, resulted in only 81% of Americans being able to recall where they were when hearing the news.

Most Americans also reported the large emotional toll that the event had on them after September 11th: 71% had felt depressed, 63% could not stop watching the news and one-third reported they had trouble sleeping in the days after. Seventy-five percent of Americans claimed the attacks “affected them emotionally a great deal”, though this was less the case for younger Americans, ages 18 – 29  in the poll, at 55%.

In another example of near unanimity among Americans, 61% responded that life in the United States had greatly changed since 9/11, while only 10% said it had not. Twenty-eight percent of respondents felt America had changed “only a little bit.”

Where the poll noted divergences among Americans were in respondents’ views of US policies following the attacks. Some of these divisions are a shift in views from when they were more widely held, perhaps reflecting public disenchantment from the war on terror. Findings revealed a larger proportion of Americans now believing that the attacks may have been motivated by the US  having done things “wrong in its dealings with other countries”, with 43% holding this view, opposed to 45% believing that US policies did not play any part in leading to the attacks. In 2001, 55% of Americans rejected that the attacks could have been inspired by US wrongdoing to thirty-three percent who believed that US actions were a factor.

Despite 76% of Americans believing the government has been doing “very well” or “fairly well” in preventing new terrorist attacks, only 35% percent responded to the question that the reason another major attack had been averted was a result of government efforts, with 43% believing the country had been lucky. Another 16% attributed this to the United States being a difficult target.

In addition, only 26% of respondents felt the war in Iraq had made the country safer from another attack, and only 25% believed operations in Afghanistan had reduced the likelihood of terrorism. On the other hand, larger proportions of Americans believed that the wars in Iraq and Afghanistan had increased the chances of new terrorist attacks, at 31% and 37% respectively. Meanwhile the approval ratings of President Bush’s handling of 9/11 immediately after the attacks have fallen from 86% in 2001, to 56% in retrospect ten years later.

Regarding measures such as extra screening for passengers appearing Middle Eastern, the use of torture and monitoring of phone conversations, the public, according to the report, remains more or less divided as before on these issues, with small majorities still favoring the former two measures and large majority disapproving of the later. Fewer Americans, however, believed that the general public will have to give up civil liberties due to the terrorism threat than previously: 40% presently compared to 49% one year after the attack.

On Muslim relations, poll results could be described as somewhat more positive, in that 57% of Americans believe that the ensuing “war on terror” did not represent a broader “clash of civilizations” but rather a conflict with small radical groups, an improvement from several years ago. Thirty-five percent viewed it as a broader confrontation. While Americans expressed continued concern about the threat of Islamic extremism in the United States, 67%, this depicted a decline from its peak in 2007 when 78% were at least somewhat worried by homegrown terrorism.

Interestingly the poll showed very clear divergences in views among different demographic groups. Republicans broadly reject the view that US wrongdoing could have motivated the 9/11 attacks (65%) while 48% of Democrats and 50% of Independents today believe that this was a factor. Republicans are also more inclined to perceive a clash of civilizations (40% versus 32% of Democrats), to be concerned about homegrown Islamic terrorism (54% opposed to 22% of Democrats) and to believe extremism is on the rise among Muslims in the US (34% versus 18% of Democrats). Concerns for the latter likely reflect, in part, the mosque controversies and anti-Sharia law campaigns in state legislatures that have propagated among conservative constituencies in the past year.

Younger Americans on the other hand are more likely to be critical of US policies. Fifty-two percent of 18-29 year olds and 49% of 30 to 49 years in 2011 attribute US policies to the 9/11 attacks. Young Americans are also less likely to view Muslims negatively according to the survey. Women were much less likely to perceive favorably government policies such as the Afghanistan war.

Looking Back on a Personal Note

As a personal anecdote as an American, many of the findings by the Pew Center make sense based on my own experience. Of course I remember where I was on 9/11, as probably do most other people around the world. I was in the first two weeks of my senior year in college in Washington D.C. I remember being shocked, horrified and then being consumed by wanting to watch the news over the next few weeks, feeling anger and patriotism. I even remember being able to say that I approved of the way George Bush was handling the situation and developing a favorable view of him, a long way to come for someone like myself having not been a fan beforehand.

But it didn’t take long until I began to feel that 9/11 was being used as a pretense to justify other objectives, first as tensions flared in the Middle East and then during the lead up to an Iraq war, as it was clear that there was much that separated these situations from the September 11th attacks. As this poll also revealed about many Americans, events since 9/11 opened up my eyes to perceive US policies and double standards that contribute to anti-Americanism, allowing destructive and archaic groups like Al Qaeda to appear credible among some Muslims, which otherwise would be much more marginalized and less appealing.

Part of the tragedy of 9/11 is that the attacks steered the country in the wrong direction. It spawned language like “evil doers,” simplistic analysis such as “who attacked us because they hate our way of life and freedom,” along with color-coded terror alerts, freedom towers and freedom fries. When the newly created Department of Homeland Security was called to mobilize after Hurricane Katrina hit New Orleans, the government seemed less capable of reacting to national emergencies, despite spending billions. The focus on Iraq, lead to the neglect of Afghanistan when the conflict was perhaps more manageable. Somehow the politicization of the event and sensationalized fear started taking away from the grief of that day and people who lost their lives.

While more Americans, as revealed by the poll, believe that policy responses such as the war in Iraq have made the country less safe opposed to more secure, interestingly, the development which seems most likely to reduce terrorism has been the Arab Spring that started during the tenth year of the anniversary. The pro-democracy movement in the Arab world was not abetted by any US policy response, but through developments such as the appearance of news outlets like Al Jazeera, that only a few years ago was frequently decried in the United States, and American college students creating social networks like Facebook. The movement is a far cry from the Bush administration’s efforts to set-off a chain reaction of democracy by imposing it with military force in Iraq.

The survey’s results which showed that younger Americans are less susceptible to anti-Muslim propaganda, and more willing to be critical of US foreign policies, may also present opportunities for the United States to eventually address some of the root causes of anti-Americanism that has built support for terrorist groups.

One of the reasons that the election of Barak Obama was so celebrated across the country and worldwide was that it promised to mark an end to an era and break from the recent past. While the last three years shows that the United States still faces many challenges, much of which are a result of the policies pursued in the aftermath of the attacks, to his credit, under President Obama, September 11th has no longer been politicized. The approaching day does feel like one where we can honor and mourn those who were lost.

*Benjamin Villanti is editor and contributor to Morocco World News.