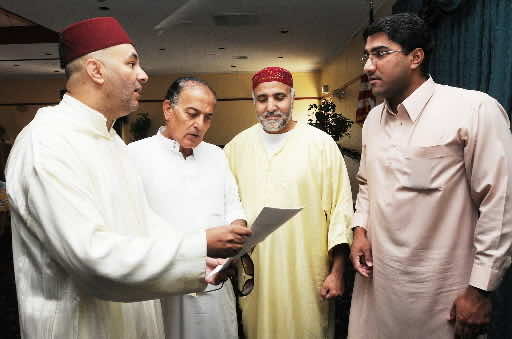 The jihadists who attacked America 10 years ago were not true followers of Islam, Lebanon Valley Muslims say.

Rachid Jdioui doesn’t pause even slightly to answer the question.

“I don’t want that to happen,” the 38-year-old head custodian at Southeast Elementary School said without hesitation. “I was angry about what happened.”

Jdioui, a native of Morocco, had moved to the Lebanon Valley (Pennsylvania) in December 1999. He was looking to build a better life, and he has succeeded. He’s now married and looking forward to becoming a father.

The fact that the perpetrators of the 9/11 jet hijackings and acts of terror were Muslims remains hard for Jdioui to stomach.

Jdioui is a devout Muslim, who reads the Koran and fasts during the month-long Muslim observance of Ramadan, which ended on the last day of August.

He said the hijackers might have called themselves Muslims, but they didn’t follow the holy book’s teachings.

“Islam is not like terror,” Jdioui said. “Islam belongs to God, not to any group. Islam teaches you to be peaceful. Don’t put together Islam and what those people do. … God is God for all religions, Jews, Muslims, Christians.”

Dr. Irshad Jaffri, a veterinarian who operates the East Lebanon Animal Clinic, is president of the Lebanon Valley Mosque, which was founded three years ago on North Ninth Street and will move later this year to a former Realtors office at 1300 Florence St. in the city’s southwest corner. About 50 families attend worship services at the mosque.

“I feel very bad, very sad,” Jaffri said when asked to recall the 9/11 attacks. “Innocent peoples’ lives were taken. That is not the way we’re being taught. Every person’s life is precious. … We are all human beings.”

A native of Pakistan, Jaffri worked three decades for the U.S. government before moving here on the advice of friends and opening his clinic.

In the aftermath of 9/11, Jaffri said, a man on a city street yelled at him, “You are a terrorist.”

Jaffri said he did not respond.

“I was always careful,” he said. “This was the only incident.”

In fact, he was offered support from his patients’ owners.

“People were very helpful,” he said. “They were calling, asking if I was OK. This is my experience. Even somebody from West Virginia (where he had previously worked) called me.”

Jaffri blamed the media “for giving the perception of negativity (about Muslims). That is giving me problems. They create hatred among the community.”

Muslims “teach harmony,” he said. “We emphasize you have to take care of the community, starting with your family. We are constructive, not destructive. This is the way the teaching is.”

A therapeutic staff support employee for the Youth Advocate program, he has lived here almost 11 years.

Most of Lebanon’s Muslims are north Africans, originally Moroccan or Egyptian, but Hossni noted that there are Indians, Pakistanis, Bangladeshis, American blacks and even a Hispanic member of the Lebanon Valley Mosque, which he serves as vice president.

Only a handful were here on 9/11, and those who were here were appalled at what they saw on their television screens, Hossni said.

“What happened that day shocked all of us,” he said. “We didn’t know what happened. We got a lot of phone calls from families overseas. We didn’t like what happened. … Whoever did that hit Christians and Jews and us.”

Muslims are patriotic, just like other Americans, he added.

During a celebration of the end of Ramadan, a month-long Muslim holiday that ended in late August, Hossni spoke about Muslim parents’ duties to instill a love for their religion in their children. While urging the parents to raised their children as Muslims, he reminded them of their duties to their nation.

“You are Muslim by who you are inside and American by where you are,” Hossni said. “We have to appreciate what we have. We have peace and freedom before our brothers in other countries.”

Looking forward to the prospect of a new mosque in Lebanon (Pennsylvania), Hossni said, “What we are doing now is not for us: it’s for the next generation.”