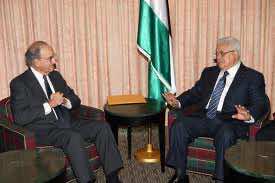 George Mitchell, the former U.S. special envoy for Middle East peace, said Thursday there was little chance U.S. officials would be able to persuade Palestinian leaders not to seek greater recognition at the United Nations.

Mitchell, who stepped down in May after more than two years of fruitless efforts to make peace between the Palestinians and the Israelis, was downbeat about the odds of making progress in the coming months but more optimistic over the longer term.

The Palestinians have vowed to upgrade their U.N. status, either by seeking full United Nations membership for a Palestinian state in the Gaza Strip and West Bank or recognition as a “non-member state.”

The United States and Israel have argued against this, making the case that the conflict should be resolved in direct negotiations and that taking steps at the United Nations would leave the two sides further apart.

“I think there was and is little likelihood that they will succeed in that effort,” Mitchell said at a conference on peacemaking at Georgetown University in Washington.

If the Palestinians ignore U.S. and Israeli opposition and pursue full U.N. membership of a Palestinian state with East Jerusalem as its capital, the bid would likely fail because Washington would veto it in the U.N. Security Council.

It remains unclear whether the Palestinians will seek full membership, upgraded observer status or both.

Mitchell, who helped broker the agreement that ended the Northern Ireland conflict, earlier told the audience that he saw little chance of progress in the next few months but that he was more optimistic over the longer term.

“There are tremendous obstacles to be overcome, not the least of which is the internal political situation on both sides,” Mitchell said.

“We in this country see our country deeply divided on major political issues (and) ought not to be surprised similar circumstances exist in other countries and make it difficult for leaders to take the steps needed to get from their current positions to what I think is the essential outcome,” he added.

“In the short term, and I mean by that the next few months, it’s difficult to be overly optimistic, to put it mildly,” he said.

“But I believe that in the medium and longer term there is a basis for believing that they will be able to take those steps primarily because the current circumstance, in my judgement, is unsustainable and both societies face very large risks from a continuation of the conflict.”