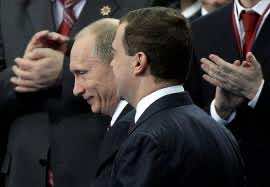 Muammar Gaddafi’s demise is all but a done thing, carried out with a UN blessing, however dubious, and only belatedly opposed by Russia and China. Russian policy makers are now wondering if their quasi-principled condemnation of Western-backed regime change in Libya was not just Quixotic but downright stupid.

Libya’s National Transitional Council denies that Information Minister Mahmoud Shammam signed a secret agreement with France in March mediated by the Qatari government, whereby French companies would control more than a third of Libya’s oil production in return for Paris’s early and staunch support for the rebels. However, even as Russia recognised the NTC last week, Abdeljalil Mayouf, information manager of the rebels’ Arabian Gulf Oil Company, warned, “We don’t have a problem with Western countries like the Italians, French and UK companies. But we may have some political issues with Russia, China and Brazil.”

Gaddafi’s impending fate is now fuelling Western efforts to topple Bashir Al-Assad in Syria, with France openly organising the rebels, and a European boycott of Syrian oil in place as of Friday. The latter is potentially more devastating than hosting dissident conferences in Paris, as almost all of Syria ’s oil ? a third of its total export revenues ? goes to Europe .

The burning question now is “Should Russia accede to Western plans for the Middle East?” To “learn from its mistake” in Libya and dump Al-Assad immediately, whatever the internal dynamics of Syria may be? The whole relationship of Russia to the Arab Spring is now heatedly discussed, with many critical of Western machinations but just as many worried that Russia will only lose out if it stays aloof.

The two camps represent the two poles in post-Soviet Russian thinking: the Eurasianists vs the Atlantists. The former trying to put Russia at the centre of an independent anti-Western coalition. The latter are happy to throw in the towel, to accede to the Western hegemony which characterises the postmodern imperial order unfolding since the collapse of the Soviet Union.

There are powerful forces in Russia behind both views. Atlantist enthusiast Russian President Dmitri Medvedev was responsible for the success of UN Resolution 1973 allowing the NATO bombing of Libya. In March, he overrode broad Russian opposition including by Prime Minister Vladimir Putin, who denounced the Western invasion as a new Crusade. Medvedev had to fire Russian ambassador to Libya Vladimir Chamov when the latter sided with Putin. Medvedev now warns Al-Assad of a “dire fate” if he continues his campaign against the opposition.

Those who want to accede to the Western agenda complain that in Libya Tatneft and Gazprom Neft will have to abandon their projects. “We won’t have anything; Libya ’s oil market will shift in favor of Italian ENI. After them, the American and European companies,” whines Uralsib Capital analyst Alexei Kokin. The Russian Railways contract to build a 550 km high-speed rail line from Sirt to Benghazi also appears to be under review by the new government in Tripoli.

Libya is far away, and was never much of a Soviet-Russian ally. In Syria, Russian economic and security stakes are much higher. Not only is Syria one of Russia’s largest arms export customers, with current and pending deals valued at $10 billion, but Al-Assad’s regime is also a significant Russian security partner in the Middle East. The Russian navy is dependent on Syrian ports to sustain its operations in the Mediterranean Sea and the Persian Gulf.

Russia’s NATO Ambassador Dmitri Rogozin scoffed at the idea that the West had any altruistic motives in invading Libya. He told the EUobserver on 2 September that the Libya experience shows NATO will now “expand towards its southern borders”, and though he was happy NATO had stopped expanding eastward, “we cannot trust [that] NATO will not exceed the mandate and NATO bombs will not be dropped on Damascus.”

Concerning the proposed UN resolution against Syria, Russian Foreign Minister Sergei Lavrov said, “This is a call for a repeat of the Libyan scenario. The BRICS nations will not allow this to happen.” There is no question for the Russians that honest elections are now unavoidable in Syria in future, but “we strongly believe it is unacceptable to instigate the Syrian opposition to continue boycotting suggestions to start a dialogue.” Russia is unwilling to contemplate another Western-incited civil war and invasion leading to regime change. For the moment, the Eurasianists have the upper hand.

Underlying the Atlantist-Eurasianist debate is the fate of the entire Western project to transform the Middle East, which has been in the works since the 1980s with the rise of the neocons. This plan was to bring about a controlled chaos in the region, creating a series of weak statelets that would benefit a strong Israel. Oded Yinon’s “A Strategy for Israel in the 1980s” proposed the policy of divide-and-conquer. Hizbullah leader Hassan Nasrallah described the Israeli policy in 2007 as intended to create “a region that has been partitioned into ethnic and confessional states that are in agreement with each other. This is the new Middle East.”

But given the horrors of this policy in action since 2000, the burning question for Russian politicians is not just “Should we accede to Western plans for the Middle East?” but rather “Are Western plans in the Middle East going to succeed, and is Russia helpless to influence them?”

The neocon wars of the 2000s were the steel fist approach to subduing Islam: kill millions and terrorise the survivors. But they have been a disaster, made the US and Israel pariahs, and left a trail of terrorism in their wake.

In Libya and Syria today, Afghanistan and Iraq loom large. Russian Profile analyst Alexandre Strokanov fears that “the real war and even more horrifying suffering still lay ahead for the Libyan people” and warns that weapons from Al-Gaddafi’s arsenal could well end up in terrorist hands. Neither the US nor the EU are in any position to get involved in another “nation-building project”. In any case, the new Libyan government will have to show its fiercely proud people that it is independent from all foreign powers.

It is clear now the whole Arab Spring is not as spontaneous as appeared at first glance. While the regimes across the region were indeed corrupt and dictatorial, they were all supported by the West. But so was the opposition.

The moment came when they were perceived as passed their due date, and with the neocons in office by 2000 and PNAC’s “new Pearl Harbour ” on the horizon, it was possible to proceed with Yinon’s plan to create dynamic chaos in the Middle East. The Arab Spring is, in an eerie way, a natural conclusion to the wars in Afghanistan and Iraq. A sort of “If you can’t beat ‘em, join ‘em”, American style.

It has taken various forms so far, with a breezy boot for Zine Al-Abidine Bin Ali in Tunisia, a pair of handcuffs for Hosni Mubarak in Egypt, a burnt face for Ali Abdullah Saleh in Yemen, impending assassination for Al-Gaddafi, and who-knows-what for Al-Assad. The only ones to escape unharmed are the Gulf sheikhs and the kings of Morocco and Jordan, who are so compliant that they need only a tap on the shoulder to do Washington’s bidding. Oh yes, Algeria’s President Abdelaziz Bouteflika is still hanging on, but not even the neocons dare to overthrow him and reopen civil war wounds from the 1990s.

That is not to denigrate the revolutionaries across the region, nor to dismiss their heroic (but very much uphill) struggles to achieve independence in the face of the Western intriguers. Among the prominent new leaders are Muslim Brotherhood leaders such as Tunisia ’s Rachid Ghannouchi and Egypt’s Essam El-Erian. Their popular Renaissance and Freedom and Justice parties are projected to win the plurality of seats in upcoming elections, and they have no use for the imperialists. Then there is Libyan rebel military leader Abdullah Hakim Belhaj who plans to take the US to court for torturing him and then rendering him to Gaddafi. There are few secular heroes in the region that can vie with the long-suffering Islamists.

While Italy and Britain were cruel colonial taskmasters in Libya before independence, Russia has no such imperial baggage. Russian officials met with both sides throughout the stand-off to try to negotiate a ceasefire, emphasising the importance of international law, and have nothing to be ashamed of. If it’s any comfort to Atlantists like Kokin, even enthusiastic support by Russia of the bald imperial venture to unseat Gaddafi would hardly have done Tatneft or Russian Railways much good.

Russia inherits fond memories across the region as the anti-Zionist Soviet Union’s successor. It now has the chance to gain long term credibility as a principled partner not only in the Middle East but to nonaligned countries everywhere, and should stick to international law and stare down the imperialists.

Eric Walberg is a journalist who worked in Uzbekistan and is now writing for Al-Ahram Weekly in Cairo. His recently published book is Postmodern Imperialism: Geopolitics and the Great Games.