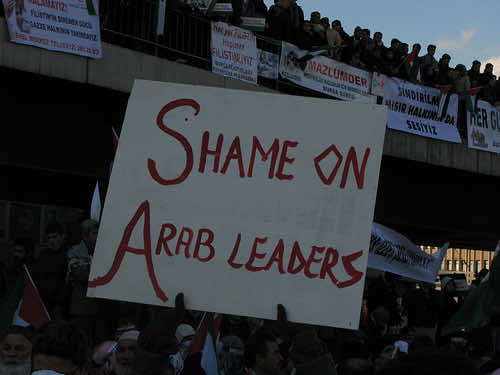 Iraq, Libya, Syria and Yemen: what they’ve all had in common is sloganeering pan-Arab ideologues, happy to sacrifice everything except their privileges.

I was greatly saddened as I watched events in Libya unfold during the revolution until it reached the capital Tripoli. The drama of killing and destruction was gut wrenching, and the claims and lies —despite all the signs —make one question how we lived with these deceptions for four decades. The most heart-breaking scene was the state of Libyan towns and villages; even big cities such as Benghazi and the capital Tripoli were drowning in poverty, misery and terror. All this was occurring in a country with a population of five million, producing 1.6 million barrels of almost raw oil every day to export at inflated prices.

What did the man do to this revolution, the people of Libya and the reputation of Arabs around the world? Libya could have been like any other oil-producing Arab state on the Gulf Cooperation Council. Despite varying degrees of development, they built infrastructure, citizens received a percentage of the wealth, and education and healthcare thrived in prosperous cities. While wealth is not everything, and there are greater demands being made by the Arabs living in oil producing and non-oil producing countries, the disparities are great between conditions in Libya and other Arab states, including more populated ones such as Egypt, Morocco and Tunisia.

Conditions in Libya should come as no surprise, however, as we view conditions in one town after another. We were appalled in the same way after the US invasion of Iraq; not only were we deeply pained at the occupation of an Arab country, but also at the condition of that country that had the benefits of oil and water resources to place it at the forefront of other Arab states. But there was nothing but poverty there, destitution, Baath Party slogans, and statues of the leader who spoke exactly in the same way as Gaddafi with shocking arrogance, calling on his under trodden people to stand up and fight the foreign invader.

Is it any coincidence that Libya and Iraq were liberated from domestic colonialism by multinational troops or NATO, both of which are seen as colonial in the eyes of the nations concerned? Is it also any coincidence that the exact same scenario is now unfolding in Syria, as towns buckle under backwardness, poverty and destitution like that experienced in Iraqi and Libyan villages? It is true that Syria is not a major oil-producer, but it has received very generous assistance and grants from rich Arab states that would have been enough in another country to place it in a more advantageous position among other states.

The common denominator between Saddam Hussein, Bashar Al-Assad, Muammar Gaddafi and Ali Abdullah Saleh is the ideology of pan-Arabism, which is built on the belief that the Arab people have a right to live in prosperity and unity. But here are their own states languishing under occupation, destitution and poverty, finally resulting in fractures, civil war and long lost decades as the world changes and countries that were on a similar development wrung advance in leaps and bounds.

Ironically, Gaddafi called for unity between Libya and each of the Arab states, and when he failed to accomplish this feat, he sought out Chad and Malta. And now he is the reason why Libya is threatened with fragmentation amid infinite tribal wars.

Is it any coincidence that the group that championed resistance and international conspiracies is the one that ended up surrendering their countries to foreign occupiers, and —more ominously —dividing these countries into warring blocks based on ideology and religion? Oddly enough, Gaddafi, the leader of the Libyan revolution, in the end (and with enviable honesty) promoted himself as the defender of the West against Al-Qaeda. Al-Assad did the same —also with enviable honesty. Saddam Hussein was willing to become the defence shield against Iran and international terrorism, so he invaded Kuwait. But shortly afterwards Kuwait was liberated and then Iraq was the one that was invaded and occupied.

They were all protagonists in a wretched drama and great calamity for their countries and people. More dangerously, they wanted this to be more widespread and common across the entire Arab region. As long as they believed in pan-Arabism and Arab unity, this belief gave them “license” to interfere in the affairs of other Arab countries, defining these countries’ national interests with lethal arrogance, condescension and conceit. This is combined with historic folly that is glaringly apparent when they bring down the temple over the heads of their people.

Gaddafi, like Saddam Hussein and Al-Assad, is no longer willing to listen to honest Arab counsel to abdicate power and leave the country to start anew, to live without fear, poverty and lack of dignity that was usurped by battalions of security and intelligence agencies. Despite the large number of these agencies, they are the first to surrender, abandon battle and give incorrect advice to leaders who suddenly discover that the world they created is nothing more than a castle of sand that collapses at the first sign of waves or wind.

These men all share the same bleak end. In comparison, Zein Al-Abidine Bin Ali, who was never a pan-Arabist, fled Tunisia after one month of revolution in a country that had made advances, although without achieving the goals of the Tunisian people. Hosni Mubarak left power after 18 days of revolution, but refused to flee or seek refuge outside Egypt. He stayed in the country, accepting to face trial and his accusers in open court.

But this group of pan-Arab leaders, the philosophers, theorists, writers of books and slogans, are of a different opinion; namely they cannot leave power before they wreak havoc, just like Nero did, setting Rome ablaze. Syria, Iraq, Yemen and Libya had to be torched in a long and painful process that took 13 years in Iraq, perhaps seven months in Libya, no one knows how long in Yemen, and Al-Assad is adamant to not leave Syria until it is in ruins.

Not a single message from the people or advice from the world has been heeded. All that remains is an astonishing persistence to continue on the path until the end, where the blood overflows, funds are squandered, and there is a sea of wasted time for oppressed populations.