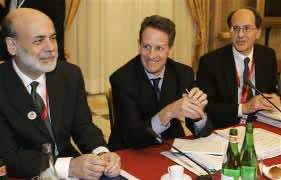 The world’s top financial leaders meet Friday in France to work on a plan to solve the European debt crisis that is rattling markets and to avoid another recession by boosting growth.

The finance ministers and central bankers from the G7 major industrialised economies will also focus on the health of European banking system, which in August was shaken by sudden sell-offs sparked by investor anxiety.

International Monetary Fund chief Christine Lagarde will also join the ministers from Canada, the United States, Japan, Germany, Britain, France and Italy at the meeting in the Mediterranean port city of Marseille.

France — the host and this year’s head of the G7 and the wider G20 — said this week it wanted the two-day meeting to reach a “coordinated response” that would boost growth, create employment and help pay off debt.

Libya’s new administration — whose fighters have just ousted longtime leader Moamer Kadhafi — has also been invited in a follow-up to the economic support for the so-called Arab Spring announced at a G7 meeting in May.

The fledgling Libyan administration will join Tunisia, Egypt, Morocco and Jordan as they explain how they plan to relaunch their economies and hear what help they can expect from the world’s major powers.

The Marseille meeting opens a day after President Barack Obama was to make a crucial speech aimed at tackling zero US job growth and jolting the economy back into life and away from a double-dip recession.

The plan includes injecting $300 billion in tax cuts, infrastructure spending and aid to state and local governments, US media reported.

The US jobs engine has shuddered to a halt, growth is stagnant, deficits and debt cloud Washington’s credit outlook, stock markets are tumbling, consumer confidence has dried up and global contagion is feared again.

The meeting comes at a time of high political tension in Europe’s major economies over the debt crisis, with governments struggling to get deep reform and austerity measures through parliament.

In Spain, thousands marched on Tuesday against a plan to enshrine balanced budgets in the constitution — following Germany’s example — and demanding that the issue be put to a referendum.

The Italian government has put forward new austerity measures and called for a confidence vote in parliament, allowing the Senate to vote on Wednesday on the 45.5-billion-euro ($64.0-billion) plan.

French deputies were also in the process of debating strict austerity measures.

But there was relief for Europe when Germany’s top court on Wednesday spared the eurozone new dangers by upholding bailouts for debt-wracked nations.

In another move likely to ease market fears, Greece bowed Wednesday to intense pressure from its international lenders to speed up reforms and prevent a default on its debts.

The G7 Marseille meeting will also focus on exchange rates after Japan’s finance minister reiterated that he will try to convince his counterparts that a strong yen is a threat to the world’s third-biggest economy.

Analysts say the meeting will have added significance after the Swiss National Bank set a minimum exchange rate of 1.20 francs per euro, saying the value of its currency — which, like the yen, is seen as a safe haven — was a threat to the economy.

More countries, including Japan, could now be encouraged to intervene to protect their respective economies from the impact of sharp fluctuations in currency markets, said analysts.

The G7 ministers will not be issuing a final communique on Saturday, officials said, but France’s Baroin will give a press conference.