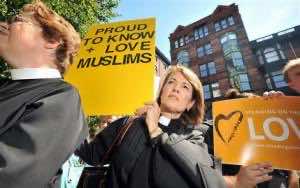 Some have argued that Islam was one of the victims of 9/11, hijacked like those planes on that horrific day a decade ago.

While some Americans mistook al Qaeda’s loud religious rhetoric for real domination, in reality Islam was safe on the 11th of September and every day after, quietly inspiring millions of believers to reject violence, serve humanity, and demand their freedom.

From the very first instant, Muslim American first responders tapped into their spiritual tradition for the courage to risk death so that others may live. Others sought comfort in its values as they grieved for their lost loved ones.

For millions more, Islam fueled their moral outrage at the barbaric act of murder and their sympathy for the victims. A recent Abu Dhabi Gallup report on Muslim Americans found it to be the most likely American faith community to unequivocally reject attacks on civilians as ‘never justified.’ Asked to explain their rejection of 9/11, Gallup global opinion research found that Muslim respondents from Morocco to Malaysia referenced their moral and religious principles.
The faith of a billion shaped what Muslims were for, not just what they were against over the past ten years. The faithful worked to fulfill their religion’s injunctions to serve God in serving others by feeding the hungry, sheltering the homeless and treating the ill.

This longstanding contribution first got national attention in the summer of 2009 when President Obama called all Americans to serve in their community to aid in the nation’s economic recovery. Muslim Americans enthusiastically responded.

The community’s national and local organizations provided meals, clothing and health supplies to tens of thousands of homeless Americans, continuing or scaling up regular service projects and beginning new ones. Muslim American doctors provided free medical care to uninsured Americans at more than 30 free medical clinics throughout the country. Grass roots organizers educated urban residents about disaster readiness, cleaned parks and built homes for neighbors without, as charities provided new text books to schools on Native American reservations. MuslimServe, a national Muslim American service campaign, counted more than 3000 day long service projects in just the summer of ’09, and the effort continues.
This volunteer effort not only served Americans of all faiths, but 90 percent of the projects were themselves interfaith efforts, countering any notion of an insular religious community, and earning the work White House recognition.

Earning the world’s recognition and providing the greatest proof of al Qaeda’s impotence in capturing Islam were the unarmed faithful millions who took to the streets across the Middle East and North Africa to demand their universal rights. We often forget that Ayman Alzawahri’s original target was the Mubarak regime. In Egypt, ordinary people whose peaceful protests often began with prayer, achieved in weeks what al Qaeda’s bombs failed to accomplish in decades.

This rising call for dignity defines this era’s final year, just as the attacks of 9/11 were its piercing start. The former propelled by the moral conviction of the many, the latter by the fanaticism of a fringe. Though many challenges lie ahead, the historical transformations of the past months signal that it will be the principled actions of the millions not the destructive drives of the few that define the next decade.

Dalia Mogahed is director and senior analysts at the Abu Dhabi Gallup Center and the Gallup Center for Muslim Studies. She is co-author with John L. Esposito of “Who Speaks for Islam? What a Billion Muslims Really Think.”